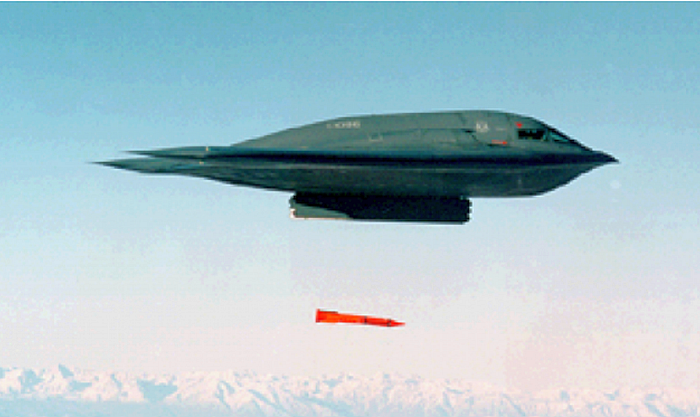 Two surveillance flight tests using mock B61-7 and B61-11 nuclear bombs were successfully carried out in the Nevada desert several weeks ago, according to a release last week.

The mock bombs did not carry any nuclear devices but instead recorded information on how the bombs performed during the test runs. The tests were jointly conducted at Tonopah Test Range by the U.S. Air Force’s Global Strike Command and the National Nuclear Security Administration (NNSA).

Two B-2A Spirit stealth bombers dropped the mock bombs to “allow scientists and engineers from national laboratories to assess their performance” and they “contain no nuclear materials and are not capable of nuclear yield,” the NNSA said in a news release on Oct. 6.

Engineers and scientists with the NNSA will then use data collected from the tests to conduct computer simulations to look at the weapon systems’ reliability to see if they are working as designed.

“The B61 is a critical element of the U.S. nuclear triad and the extended deterrent,” Brig. Gen. Michael Lutton, NNSA’s Principal Assistant Deputy Administrator for Military Application, said in the release. “The recent surveillance flight tests demonstrate NNSA’s commitment to ensure all weapon systems are safe, secure, and effective.”

The B61 nuclear bomb is one of the thermonuclear weapons in the U.S. weapons stockpile following the end of the Cold War.

According to the Air Force Times, the B61-11 variant is designed to penetrate the ground to destroy underground bunkers and other targets. The Federation of American Scientists (FAS) said that when the weapon was introduced in 1997, its “deployment was controversial because of official US policy not to develop new nuclear weapons.”

“The earth-penetrating capability of the B61-11 is fairly limited, however,” the FAS says. “Tests show it penetrates only 20 feet or so into dry earth when dropped from an altitude of 40,000 feet. Even so, by burying itself into the ground before detonation, a much higher proportion of the explosion energy is transferred to ground shock compared to a surface bursts.”

It adds that an attempt to use it in an urban setting would result in untold civilian deaths and injuries. “Even at the low end of its 0.3-300 kiloton yield range, the nuclear blast will simply blow out a huge crater of radioactive material, creating a lethal gamma-radiation field over a large area,” the FAS says.