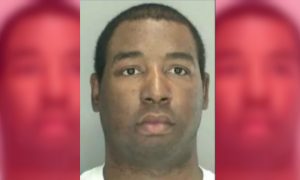 U.S. Senator Martha McSally (R-Ariz.) speaks at a hearing on prevention and response to sexual assault in the military, in Washington, on March 6, 2019. (J. Scott Applewhite/AP Photo)
US News

The United States Air Force apologized on March 6 to a sitting U.S. Senator who claims she was sexually assaulted while serving her country.

A spokeswoman said the Air Force is appalled and “deeply sorry” to hear Senator Martha McSally (R-Ariz.) allege that she was raped by a superior officer sometime between 1988 and 2010.

Captain Carrie Volpe described the criminal actions reported by McSally before the Senate Armed Services subcommittee as a violation of “every part of what it means to be an airman.”

Volpe said the Air Force stands behind McSally and all victims of sexual assault and is also committed to eliminating “reprehensible behavior” and “breach of trust.”

McSally, the first female fighter pilot to fly in combat, has not provided any details on whether the assaults happened while she was at the academy or in active duty. She also did not name any personnel involved in the assaults and just highlighted the importance of accountability at the commander level and down.

She said she had remained silent for many years after the alleged incident because she felt ashamed and confused at the time, and didn’t trust the system. But she did feel compelled later in her career to speak out about her suffering after seeing the military system and many commanders continue to fail to address the problems of sexual misconduct.

“I was horrified at how my attempt to share generally my experiences was handled,” McSally told a Senate hearing. “Like many victims, I felt like the system was raping me all over again.”

Sen. Martha McSally’s powerful remarks, as prepared, on her personal story of sexual assault in the military: pic.twitter.com/gaGWJzPqFS

“We have come a long way to stop military sexual assault but we still have a long way to go,” she said. “It took many years and too many lives ruined.”

U.S. senator and combat veteran McSally says she was raped by a superior officer: ‘Like many victims, I felt the system was raping me all over again’ https://t.co/jxWE9F1oM0 pic.twitter.com/C6wzVbj8qB

During the hearing, McSally urged that Congress keep commanders and higher-ranking officers “at the center of the solution,” where they will be required to “live up to the moral and legal responsibilities that come with being a commander.”

Fellow Senator Joni Ernst (R-Iowa) has also made allegations of abuse and assault, and joined a growing number of people who claim they were harassed and assaulted in the armed forces, and others part of the larger #MeToo movement that took aim at the professional conduct of individuals in Hollywood and major corporations.

Brave. So impressed with McSally for this. https://t.co/lIf1s4VAtU

Defense officials say the increase in reported assaults is a positive change toward victims being more willing to report attacks due to greater confidence in the reporting system, and likely not due to an increase in attacks, given that sexual assaults are often an under-reported crime.