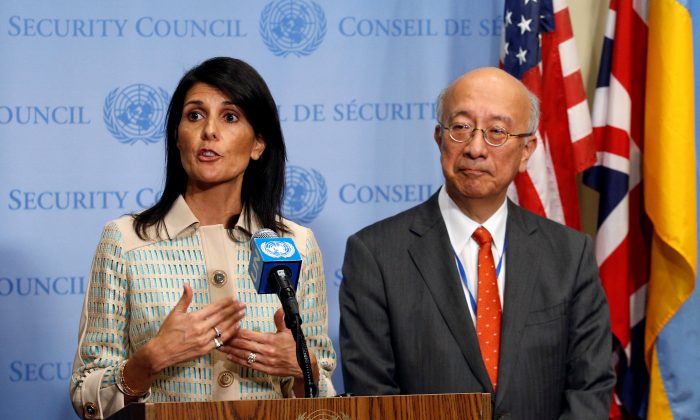 UNITED NATIONS—The United States said on Tuesday it believed it could persuade the Chinese regime to impose new U.N. sanctions on North Korea following its latest ballistic missile test and warned that Washington would also target and “call out” countries supporting Pyongyang.

Speaking to reporters ahead of a closed-door U.N. Security Council meeting on the missile launch, U.S. Ambassador to the United Nations Nikki Haley also made clear that Washington would only talk to North Korea once it halted its nuclear program.

“We are willing to talk, but not until we see a total stop of the nuclear process and of any tests there,” Haley said. “If you are a country that is supplying or supporting North Korea we will call you out on it, we will make sure that everyone knows who you are and we will target sanctions toward you as well.”

North Korea fired a ballistic missile on Sunday that landed in the sea near Russia, which experts said signaled major advances in developing an intercontinental ballistic missile that could target the United States.

The United States has been discussing possible new U.N. sanctions with Pyongyang’s ally and neighbor the Chinese regime since a failed missile test about two weeks ago.

“The conversations that I have had… with my counterpart and in dealing with Beijing is that if (North Korea) did something else and if it looked to be long range, which this does, and if it looks like it is proactively leaning toward an ICBM, which it does, then we would take action,” Haley said.

“I believe that China will stay true to that and we will come together on how we’re going to do that,” she said. “We have not seen anything from them in the past week but we are encouraging them to continue moving forward.”

The U.N. Security Council first imposed sanctions on North Korea in 2006 and has strengthened the measures in response to its five nuclear tests and two long-range rocket launches. Pyongyang is threatening a sixth nuclear test.

Traditionally, the United States and the Chinese regime have negotiated new sanctions before involving remaining council members. U.N. diplomats say the current talks are still just between the pair.

The Trump administration has been aggressively pressing Beijing to rein in North Korea, warning that all options are on the table if Pyongyang persists with its nuclear and missile development.

“We have worked well with China,” Haley said. “They have really tried to help us in our communications with North Korea.”