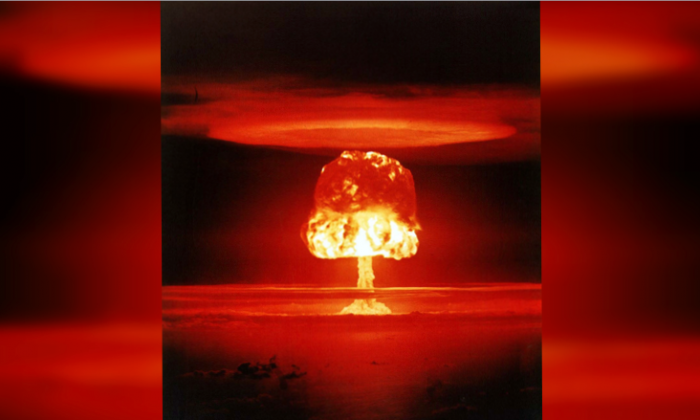 The Centers for Disease Control (CDC), a US federal agency, is holding a briefing on how the public can prepare for nuclear war. (Pixabay / CCO)
US News

A U.S. federal agency has scheduled a briefing for how the public can prepare for nuclear war.

“While a nuclear detonation is unlikely, it would have devastating results and there would be limited time to take critical protection steps,” stated the Centers for Disease Control and Prevention (CDC) on its website.

The notice about the briefing, scheduled for the Jan. 16, features a photograph of a mushroom cloud and notes that “planning and preparation can lessen deaths and illness” in the event of nuclear fallout.

Staying put and taking cover for at least 24 hours is “crucial to saving lives and reducing exposure to radiation” states the CDC, a national public health institute of the United States and a federal agency under the Department of Health and Human Services.

While federal, state and local agencies would lead the nuclear strike response efforts, public health program would also have a part to play. Hence one of the aims of the briefing, titled “Public Health Response to a Nuclear Detonation,” is to inform what public health programs have done to prepare for a nuclear detonation.

The announcement comes after a year of escalating nuclear threats from North Korean leader Kim Jong Un, who in his new year’s address declared he could launch a nuclear warhead with the help of a button on his desk.

While U.S. officials say an attack is unlikely, Hawaii’s emergency management authorities have released response guidelines and a monthly statewide siren test was reinstated on Dec. 1.

“The whole of its mainland is within the range of our nuclear strike and the nuclear button is on my office desk all the time,” Kim said in his address, according to North Korean state media.

Kim claims his regime can deliver a “super-intense thermonuclear weapon,” describing it as a “powerful and reliable war deterrent.”

President Trump responded on Tuesday by tweeting, “I too have a Nuclear Button, but it is a much bigger & more powerful one than his, and my Button works!”

North Korean Leader Kim Jong Un just stated that the “Nuclear Button is on his desk at all times.” Will someone from his depleted and food starved regime please inform him that I too have a Nuclear Button, but it is a much bigger & more powerful one than his, and my Button works!

In his address, Kim said 2017 marked “a year of heroic struggle” that has led it forward in its efforts to build “a powerful socialist country.”

North Korea’s leadership constantly frames the nation as being in an endless war of sorts with its enemies that requires tremendous sacrifice—be it food or forced labor—from the North Korean people.

The United States and its allies bombed much of North Korea after Kim’s grandfather, Kim Il Sung, invaded South Korea in 1950. Ever since, the regime has used the United States as a scapegoat to justify its “songun” or military-first policy, and its tight authoritarian control over the North Korean people.

Songun prioritizes the needs of the military over all other affairs of state, including feeding the civilian population.

That policy has become a barrier to peace, according to analysts. With the North Korean regime sustained by the threat of war, any detente with the United States becomes a threat to regime legitimacy, Yong Suk Lee, deputy assistant director of the CIA’s Korea Mission Center, told students and reporters at George Washington University on Oct 4.

“North Korea is a political organism that thrives on confrontation,” said Lee.

“One of the big stumbling blocks for dialogue is that if we do come to a good place, North Korea is going to have to explain to its people that ‘suddenly we are friends with the United States.’ North Korea exists to oppose the United States, so how are you going to explain to your population what your last 60, 70 years of sacrifice were all about.”

While Kim also called for talks with South Korea—and had North Korean officials call South Korea on a dedicated line for the first time in two years on Jan. 3—any possible de-escalation is unlikely, one analyst told The Telegraph.

Former diplomat and head of South Korean intelligence, Rah Jong-yi, said Kim will use any talks to push South Korea for aid and other concessions.

“North Korea cannot survive peace,” he said. “The regime in Pyongyang can only continue to survive on stresses and confrontation with its neighbours. Peace would bring Mr. Kim down.”

Matthew Little contributed to this article.