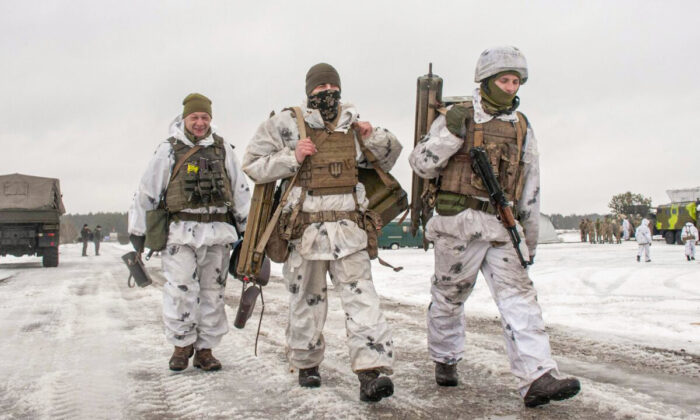 President Joe Biden has warned, pushing back on Russian claims that it has lessened its troops along the border of Ukraine as false, that Russia may engage in a false-flag operation as use that to justify their entry into Ukrainian territory.

Before boarding Marine One on Thursday, Biden told reporters that the United States predicts the threat of a Russian invasion of Ukraine is “very high” and that his sense is it will happen “in the next several days.”

“They have not moved any of their troops out. They’ve moved more troops in, number one. Number two, we have reason to believe that they are engaged in a false-flag operation to have an excuse to go in,” Biden said.

The Pentagon last month had also warned that it was predicting Russia could use a false flag operation as pretext for invading Ukraine.

Later Thursday morning aboard Air Force One, White House deputy press secretary Karine Jean-Pierre laid out possible false flag scenarios that Russia might attempt as a pretext for invasion, including a potential provocation in Ukraine’s disputed Donbas region, a claim of NATO activity by land, sea, or air, and an incursion into Russian territory.

“Russia relies on confusion and obfuscation to cover its attacks,” Jean-Pierre said. “We would all expect it and be ready for it.”

There’ve already been reports of shelling in Ukraine’s Donbas region, with both the Ukrainian government and Russian separatist groups accusing one another of shelling a civilian village in the area. This included reports of a kindergarten being struck.

Earlier in the week, the Russian Defense Ministry released videos of tanks and armored vehicles on the move and described this as troops relocating to “places of permanent deployment.”

Russia has repeatedly denied it is planning to invade Ukraine.

But on Thursday, Jean-Pierre said Russian claims of troop withdrawals are “absolutely false,” adding that the United States has confirmed a Russian troop increase along the Ukrainian border of about 7,000 in the last few days. On Tuesday, Biden said there were more than 150,000 Russian troops along Ukraine’s border and in Belarus.

Also on Thursday, the Russian government expelled the second-highest ranking U.S. diplomat from the American Embassy in Moscow, according to the State Department.

A State Department spokesperson told news outlets the move was “unprovoked” and “escalatory” and that the U.S. government is considering its response.

Meanwhile, the Kremlin also accused the United States of stoking tension and released a strongly worded 11-page reply to the United States’ list of negotiating points, in which it said that Washington was ignoring its security demands and threatened unspecified “military-technical measures.”

The United States has repeatedly said it would prefer a diplomatic solution to the conflict between Russia and Ukraine, but has also said it would impose “severe” sanctions against Russia if it moves to invade.

Secretary of State Antony Blinken made an appeal for diplomacy during remarks at the United Nations on Thursday morning.

“I am here today not to start a war, but to prevent one,” Blinken said.

Blinken added that Russia poses an “immediate threat to peace and security” and that there is no evidence on the ground that it is drawing down its troops. He then laid out the potential scenario of a false flag attempt, followed by cyber attacks and a Russian invasion into Ukraine.

“It could be a fabricated so-called terrorist bombing inside Russia, the invented discovery of a mass grave, a staged drone strike against civilians, or a fake—even a real—attack using chemical weapons. Russia may describe this event as ethnic cleansing, or a genocide.”

“If Russia doesn’t invade Ukraine, then we will be relieved that Russia changed course and proved our predictions wrong. That would be a far better outcome than the course we’re currently on and we’ll gladly accept any criticism that anyone directs at us,” Blinken added.