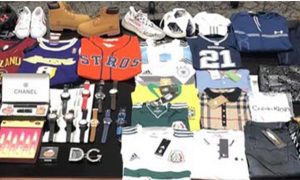 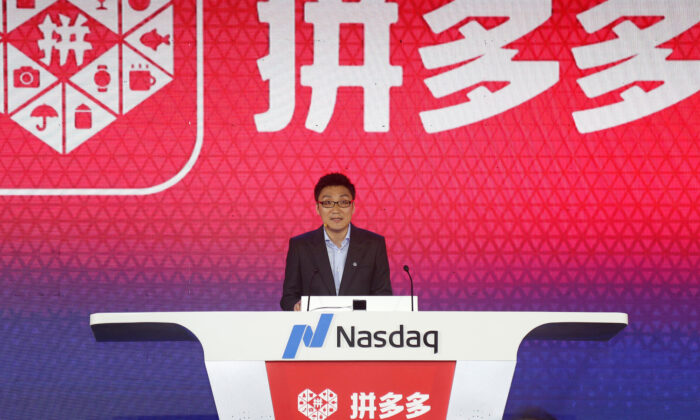 Colin Huang, founder and CEO of the online group discounter Pinduoduo, speaks during the company's stock trading debut at the Nasdaq Stock Market in New York, during an event in Shanghai, China on July 26, 2018. (Yin Liqin/CNS via Reuters)
US-China Relations

The United States on April 25 added China’s third-largest e-commerce platform to its list of “notorious markets” for violations of intellectual property rights and kept China on its priority watch list because of piracy and counterfeiting concerns.

The U.S. Trade Representative’s Office placed Pinduoduo.com, which USTR described as third-largest by the number of users, on its blacklist of commercial marketplaces that fail to curb the sale of counterfeit products. It also kept Alibaba Group’s Taobao.com, China’s largest e-commerce platform, on the list.

USTR’s annual review of trading partners’ protection of intellectual property rights and so-called “notorious markets” comes as the United States and China are embroiled in negotiations to end a trade war. The two countries are slated to resume talks in Beijing next week.

China’s inclusion on the list “reflects the urgent need to remediate a range of intellectual-property-related concerns,” a USTR official told reporters on a call to discuss the report.

He noted longstanding concerns that have been voiced by the Trump administration in the trade talks, including “coercive” technology transfer requirements, widespread copyright infringement, and “rampant” piracy and counterfeiting.

The official declined to discuss how the talks with China are going, but said that additional actions using Section 301 of the Trade Act of 1974 are possible. The United States has levied tariffs on $250 billion worth of Chinese goods under the act.

Of Pinduoduo.com, USTR said in the report: “Many of (the site’s) price-conscious shoppers are reportedly aware of the proliferation of counterfeit products on Pinduoduo.com, but are nevertheless attracted to the low-priced goods on the platform.”

Pinduoduo, similar in concept to Wish.com in the United States, said it has 300 million active buyers. Most of these buyers, however, are poor Chinese farmers, according to a July 31 article by Chinese news portal Sina.

Most of the products sold on Pinduoduo are “shanzhai,” a term used to refer to knockoff products that feature purposely misspelled names of big brands. Some goods on its marketplace resemble products from companies such as Coca-Cola, Apple, and Samsung Electronics.

With Pinduoduo, “shanzhai” products are even cheaper than knockoffs sold on other e-commerce platforms such as Alibaba’s Taobao, according to Sina. Additionally, poor Chinese farmers often don’t realize that their purchased products are knockoffs, as long as their new large-screen flat televisions can be watched, and copycats of brand-name drinks don’t cause health problems.

A total of 36 countries, including Russia and India, are on this year’s overall watch list of trade partners that warrant additional bilateral engagement over the issues.