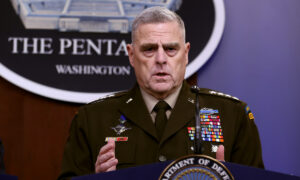 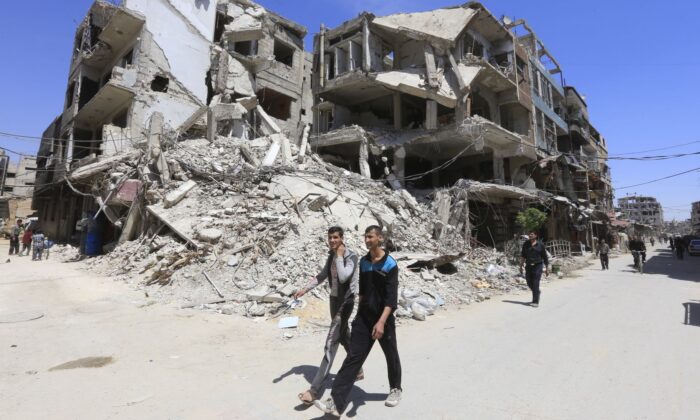 Douma on the outskirts of Damascus on April 16, 2018. (Louai Beshara/AFP via Getty Images)
International

US Accuses Russia of Helping Syria Cover Up Chemical Weapons Use

The accusation was made by Kenneth Ward, the U.S. representative to the Organisation for the Prohibition of Chemical Weapons (OPCW), at the agency’s annual conference in The Hague; the claim drew a denial from Moscow.

Moscow has for months cited dissent by two former OPCW employees who leaked a document and an email as evidence that the OPCW doctored the conclusions of a March 1 report that found a chemical containing chlorine on the site of a deadly April 2018 attack near Damascus.

More than 40 people died in the attack in Douma, a town on the outskirts of the capital that at the time was held by Islamic rebels.

The United States, Britain, and France retaliated a week later by firing missiles at Syrian government targets, the biggest Western military action against the Damascus authorities of the eight-year-long war.

Syria and Russia deny there ever was a chemical attack in Douma, saying the event was staged using bodies brought from elsewhere, and that the OPCW’s report on Douma was doctored to justify Western military intervention.

At least two chemical attacks were alleged to have hit Douma on April 7, 2018—one on a bakery and one on an apartment building—and reports of both fell prey to misinformation or propaganda, according to an investigative report by James Harkin for The Intercept.

One early report claimed that the bakery was hit with a chlorine gas munition and 25 people died. Harkin found from locals that chlorine likely was used, but didn’t kill anybody. The casualties were caused by conventional shelling instead.

Between 34 and 55 people died in the attack on the apartment building, where two yellow gas canisters were found, Harkin reported. At least one report indicated that some victims died at a nearby hospital. Footage from the hospital showing children being treated for breathing problems formed a major part of the media coverage of the incident.

But no one died at the hospital and what unfolded there “appears to have been largely a result of panic and propaganda,” Harkin wrote.

Some victims exhibited “oral foaming” and “corneal burns” consistent with the effects of a sarin-like chemical agent. But the OPCW found no traces of sarin onsite during an investigation two weeks after the incident.

The OPCW’s report on the incident conveyed the impression that traces of chlorine gas released from the canisters were found on the scene. But, in a leaked email published by The Daily Mail, an OPCW official complains that there was “insufficient evidence” to conclude that the chlorine came from the canisters. Moreover, only “trace quantities” of chlorine were found and the investigation didn’t determined where it came from.

Such a chlorine-containing chemical could also be found in “household chlorine-based bleach” and “purposely singling out chlorine gas as one of the possibilities is disingenuous,” said the email’s author, whose name was withheld by the Mail.

Harkin concluded that chlorine gas was indeed used at the apartment building and that the canisters must have been dropped from Syrian government helicopters. One of the canisters landed in such an unlikely and unfortunate way that it got stuck in the building’s roof without completely breaking through. Its release valve snapped off, and it filled the building with such a high concentration of chlorine that it could have caused the foaming and eye burning, as well as the death of all inside.

He was told that the Syrian army was using chlorine not to kill people, but to drive them out of areas since the gas is visible, has a strong odor, and when it disperses outside, it makes people sick, but doesn’t kill them. It was only because the gas was concentrated inside the building that it had such lethal consequences.

Harkin’s research was supported by a Harvard fellowship.

The Islamic rebel group Jaysh al-Islam was ousted from Douma shortly after the incident. The group was spearheaded by Saudi Arabia in 2013, The Guardian reported, and was accused in 2016 by Syrian Kurdish People’s Protection Units (YPG) of using chemical weapons against them. The symptoms then, vomiting and breathing difficulties, were consistent with chlorine exposure.

Saudi Arabia contributed $48 million to Harvard between 2005 and 2018, The Guardian reported.

The OPCW has become the battleground for a diplomatic clash on Syria after Russia in 2017 vetoed a resolution to extend the mandate of the U.N.-OPCW Joint Investigative Mechanism, which concluded in a series of reports that the Syrian military used both the nerve agent sarin and chlorine as weapons.

The OPCW’s own Investigation and Identification Team (IIT), which was established by a clear majority vote by its member states in June 2018, is probing what happened in the Douma attack, among several other incidents.

Its first report is expected next year.

The Russian ambassador to the OPCW, Alexander Shulgin, repeated objections to the creation of the IIT, saying it was illegal and politicized. Syria’s representative to the OPCW on Nov. 28 vowed not to cooperate with the IIT’s investigations.

Ward said Russia and Syria were merely seeking to cover up the use of chemical weapons by undermining the OPCW.

“Unfortunately, the Russian Federation has played a central role in this cover-up,” Ward told delegates. “Russia and Syria may sit with us here, but they stand apart from us in a fundamental way. They continue to embrace chemical weapons.”

Shulgin rejected the U.S. claim that Russia was helping Syria cover up chemical crimes carried out by the Syrian regime.

“It is exquisite rhetoric. … But these assertions do not hold water. We disagree,” Shulgin said.