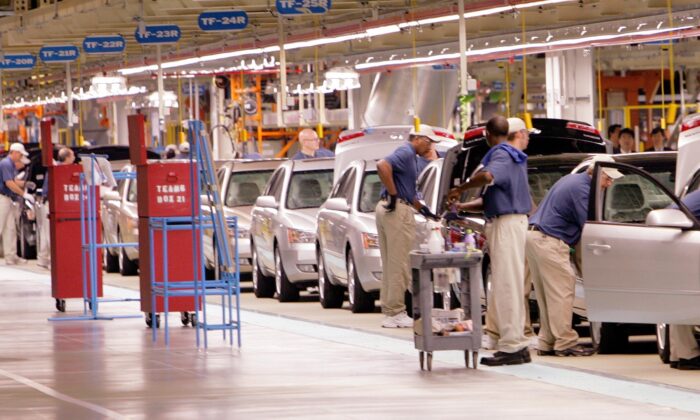 Hyundai's rolls down the assembly line during the grand opening ceremony of the South Korean auto manufacturer's plant in Montgomery, Alabama, on May 2005. (Robert Sullivan/AFP via Getty Images)
Companies

The U.S. Department of Labor (DOL) has accused a Hyundai Motor parts supplier of violating federal child labor laws at a factory in Alabama, according to multiple reports.

The findings mean that the U.S.-based factory supplying Korean-owned auto parts is accused of employing children under the age of 16.

Since last November, SL Alabama LLC “repeatedly violated” labor regulations by “employing oppressive child labor” and “minors under the age of 16,” the DOL said in the complaint.

The company was established in 2003 and is a large manufacturer of headlights, rear combination lights, and side mirrors, according to its website, which says it employs around 650 people in the Alexander City area.

The plant admitted in a statement that underaged workers had been employed at the factory, but they had been hired by an outside labor recruitment firm, which it didn’t identify.

“[The company] does not tolerate illegal employment practices in any Hyundai entity,” it told Reuters, adding that it has “policies and procedures in place that require compliance with all local, state, and federal laws.”

Along with the complaint against SL Alabama LLC, a proposed settlement agreement between the government and the manufacturer of the auto parts was filed with the court.

Under the terms of that agreement, the plant agreed to stop hiring minors, punish any managers aware of the use of underage employees, and suspend any relationship with any recruiters who supply child workers.

It is not known how many minors may have worked at the factory or what type of jobs they performed. It’s unclear if they will face charges.

Both federal and Alabama law prohibit teens and children under the age of 16 from working in most industrial factory settings because it can be dangerous for minors.