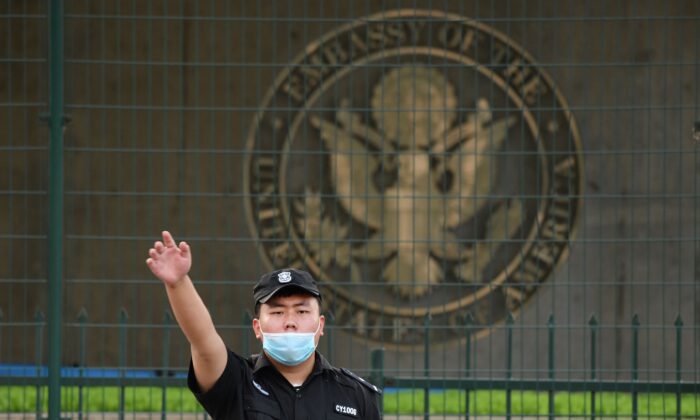 A Chinese security guard gestures outside the U.S. Embassy in Beijing on Sept. 12, 2020. (Greg Baker/AFP via Getty Images)
US-China Relations

US Accuses China of Endangering Diplomats by Fabricating Quotes About Xinjiang

The U.S. Embassy to China accused the Chinese communist regime on June 7 of putting two diplomats in danger by attributing fake quotes to them about the human rights abuses of Muslim Uyghurs in Xinjiang.

On June 5, a social media user named Buyidao, who is associated with Chinese state media Global Times, posted that the then consul and head of the Economic and Political Section of the U.S. Consulate General in Guangzhou Sheila Carey and Foreign Service Officer Andrew Chira told guests at a reception in 2021 that the U.S. government was “using the Xinjiang issue to hype up forced labor, genocide, and human rights abuses,” which is part of a “tug of war with China,” to “completely sink the Chinese government into a quagmire.”

In the post, Buyidao said that the source of the information was “Mr. R,” a supplier of an unnamed well-known international sports brand, who was allegedly at the reception held by the U.S. Consulate in Guangzhou in 2021.

Buyidao also published photos of the two U.S. foreign service officers who are employed at the U.S. Consulate in Guangzhou, and said they were “exposing Washington’s long-running plot of lies.”

The post has been widely reposted by Chinese government departments on their official social media accounts and cited by state media. Li Yang, counselor of the Information Department of the Chinese Ministry of Foreign Affairs, Chen Xiaodong, the Chinese ambassador to South Africa, and Hua Chunying, a spokeswoman for the Ministry of Foreign Affairs, all quoted the post on their Twitter accounts to accuse the United States of targeting China.

The U.S .Embassy to Beijing issued a forceful denial  of the wide spread claims on June 7, urging Beijing “to stop attributing false statements to U.S. officials or taking other actions that might subject our diplomats to harassment.”

The Chinese regime’s propaganda organs have often spread false claims about the United States, but rarely named individual diplomats and published their photographs.

In its statement, the U.S. Embassy also warned that this “potentially endangers” officials and is “inconsistent with [China’s] obligations to treat United States diplomats with due respect and take all appropriate steps to prevent any attack on their freedom or dignity.”

A spokesman of the U.S. Embassy in Beijing added on June 7 that the United States’ stance on Xinjiang has not changed.

U.S. Customs officials said on June 1 they were ready to implement the law starting on June 21. The requirement for exemption is very high.

Despite the U.S. denial of the posted claims, Chinese Foreign Affairs Ministry spokesman Zhao Lijian on June 8 said at a press conference that “a recent statement by an official of the U.S. Consulate-General in Guangzhou has once again clearly proved that the U.S. deliberately created and spread lies about ‘forced labor’ in Xinjiang in order to exclude China from the global supply chain.”

Xia Yu contributed to the report.