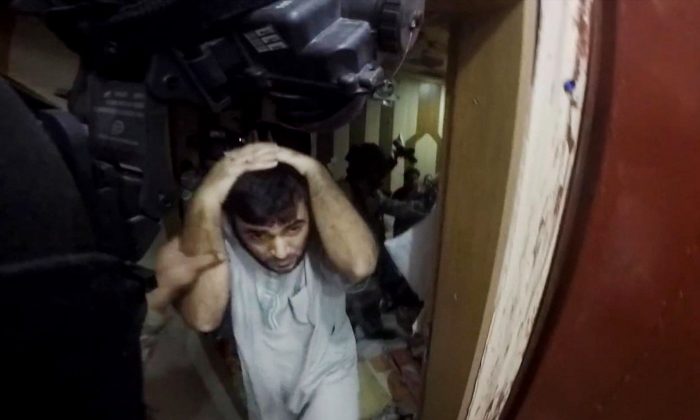 U.S. and Iraqi special forces search prisoners inside a makeshift prison in the town of Huwija, 9 miles (15 km) west of Kirkuk City, Iraq, on Oct. 22, 2015. (Kurdistan Regional Security Council via AP)
US

US ‘Absolutely Prepared’ for More Ground Combat in Iraq: Pentagon

Panicked Iraqi men are seen running out of a darkened corridor with their hands up as heavily armed soldiers point their flashlights at them, saying “Let’s go! Let’s go!”

This scene was captured via a Kurdish soldier’s helmet camera during a U.S.-assisted raid last week on an ISIS prison holding dozens of hostages that resulted in their rescue, but left one American special forces soldier dead.

Defense Secretary Ash Carter said on Friday he expects U.S. troops to engage in more combat operations in Iraq against ISIS, even at the risk of American deaths. “I’m absolutely prepared to do that,” he told reporters, according to a transcript of his remarks.

The death of Master Sgt. Joshua L. Wheeler, 39, was confirmed by the Department of Defense, prompting some to wonder whether the raid was an instance of “mission creep,” the undesirable expansion of a military project or mission beyond its initial goals, meaning that U.S. forces would be involved in more ground raids in Iraq. The killing of Wheeler was the first American combat death since 2011.

Over the past several days, U.S. officials have scrambled to explain why a fatal raid that included direct combat wasn’t technically a combat mission.

Pentagon press secretary Peter Cook described the mission as an isolated incident and insisted it wasn’t a “combat operation,” which would violate President Barack Obama’s vow in 2014 not to put boots on the ground against ISIS. In remarks to reporters on Thursday, Cook said the mission was carried out after a tip that more than 70 hostages were about to killed.

“This is combat, things are complicated,” Carter explained to reporters, while declining to give a full account of the deadly commando raid involving dozens of U.S. special operations soldiers and Kurdish fighters near Kirkuk, Iraq.

The word “combat” was being avoided by Carter and numerous U.S. military officials in an effort to comply with President Obama’s mandate. They have repeatedly stated that American troops are on the ground to train and advise Iraqi security forces.

‘Continuation’ of US mission

Carrying out raids in the future “doesn’t represent us assuming a combat role,” Carter added at the Pentagon press briefing. “It represents a continuation of our advise-and-assist mission.”

The operation is also “an example of a case where we could do something we alone had the capability to do,” Carter said. The United States is the only coalition force in Iraq that can do such rescue operations.

Regarding the Kirkuk raid, Carter said initial plans did not call for placing U.S. soldiers in a direct combat situation. U.S. forces had joined with Kurdish fighters in multiple helicopters to travel to the ISIS compound but the situation turned dangerous, he said.

“As the compound was being stormed, the plan was not for the U.S. advise-and-assist and accompanying forces to enter the compound or be involved in the firefight,” Carter said.

However, when there was a firefight at the compound, the U.S. special forces soldiers, including Wheeler, “ran to the sound of the guns” and fought. Carter said Wheeler, and one of his teammates, were instrumental in making the rescue a success.

On Saturday, Kurdish military officials put out the video that purportedly showed the rescue raid in Iraq. News outlet Arab24 released the footage, which shows a group of soldiers rushing out of a building with weapons drawn amid gunfire and flashlight beams. Later, dozens of hostages, dressed in robes, come out of the building with their hands up while the soldiers shout “Let’s go!” in Arabic.

The video does not show the exact moment when Wheeler was killed.

According to reports, the Kurdish government believed the ISIS prison was holding captured Kurdish troops, but the rescue instead freed 20 Iraqi soldiers, dozens of Arab civilians, and six ISIS fighters who were accused of being spies.