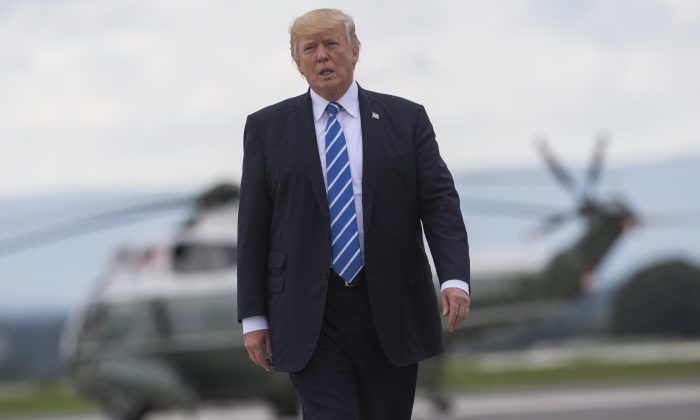 President Donald Trump walks from Marine One to board Air Force One prior to departing from Hagerstown Regional Airport following meetings at Camp David and before returning to Bedminster, New Jersey, on Aug. 18. (SAUL LOEB/AFP/Getty Images)
US

Upon Return to DC, President Trump Says Fake News Media Is Out of Control

Following his return to Washington, D.C., president Donald Trump said on Twitter that the “dishonest fake news media is out of control.”

During his stay at Trump Tower, Camp David, and his golf club in Bedminister, New Jersey, while renovations were made to the White House, the president received widespread criticism from media organizations for saying that both sides carried some of the responsibility for the violence in Charlottesville.

Thank you, the very dishonest Fake News Media is out of control! https://t.co/8J7y900VGK

Violent clashes broke out between far-right and far-left protesters in Charlottesville, Virginia, on Aug. 12, leading to the tragic death of a 32-year-old woman when a car driven by a suspected neo-Nazi sympathizer drove into a crowd of left-wing protesters.

Speaking at a press conference at Trump Tower on Aug. 15, Trump condemned neo-Nazis and white nationalists multiple times. But he also said that the other side carried some of the blame for the violence. Trump specifically, albeit not by name, called out the Antifa extremist group saying: “You see them come with the black outfits and with the helmets and with the baseball bats.”

“There were people protesting very quietly the taking down of the statue of Robert E. Lee,” he said.

“I’m not talking about the neo-Nazis and the white nationalists because they should be condemned totally.”

Most media organizations presented Trump’s comments as being favorable toward white supremacists, overlooking his condemnation of the groups.

Instead, the extremist Antifa group received some favorable coverage from media organizations. In one such article published by CNN on Aug. 20, it was describing the far-left group as seeking ‘peace through violence,’ overlooking the group’s communist and violent origins.

Antifa was established in the early 1920s as the violence and intimidation wing of the Communist Part of Germany (KPD), a front-group of the Soviet Union, which had the goal of installing communist dictatorship in Germany.

The group used the anti-fascism label to oppose any group that did not support its communist revolutionary goals. The group they primarily opposed at the time were the Social Democrats (SPD) and later equally Adolf Hitler’s Nazi party.

The group has been involved in a number of violent protests in the U.S. this year. In February this year the group set fires and smashed buildings at UC Berkeley to oppose controversial conservative Milo Yiannopoulos from speaking.

Before heading back to Washington, Trump described the reporting on Twitter as “some of the worst and most dishonest Fake News reporting I have ever seen!”

Heading back to Washington after working hard and watching some of the worst and most dishonest Fake News reporting I have ever seen!

Trump’s presidency has been marred by media organizations attacking him and his policies, as well as using inaccurate information from anonymous sources.

In one such example, former FBI Director James Comey testified under oath before the Senate Intelligence Committee on June 8, that many of the articles citing unnamed intelligence and government’s sources were inaccurate.

Comey specifically discredited a Feb. 15 front page story in The New York Times, which claimed Donald Trump and members of his 2016 presidential campaign “had repeated contacts with senior Russian intelligence officials in the year before the election.”

When asked by Sen. Tom Cotton (R-AR) whether it “would it be fair to characterize that story as almost entirely wrong,” Comey replied, “Yes.”

‘All of you know this. Maybe the American people don’t,” Comey said, addressing the Senate committee. He said when it comes to reporters writing stories about classified information, “the people talking about it often don’t really know what’s going on.”

He said there have been many stories about the Russia investigations “that are dead wrong.”