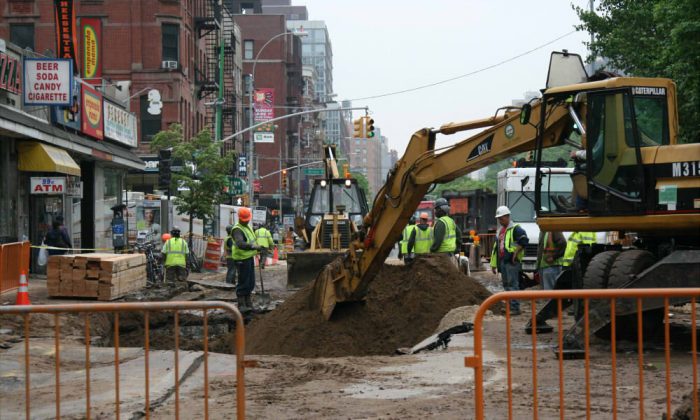 A water main break caused a 20-by-20 sinkhole outside Katz's Delicatessen on the Lower East Side, May 22, 2014. (Catherine Yang/Epoch Times)
New York

A water main break Thursday morning flooded the intersection of East Houston Street and Ludlow Street on the Lower East Side, causing a 20-by-20 foot sink hole in front of the deli. A construction crew worked through the day to fill the sinkhole in with dirt.

The deli remained open during regular hours despite its ravaged basement. The deli receives its water from a different pipe, so its water supply was unaffected.

“It ruined everything in the basement, floors, walls, you name it,” Dell said. Stacks of black garbage bags filled with ruined items could be seen piled outside the famed deli. “There was a ton of dried goods.”

The 20-inch water main ruptured and flooded the entire street and sidewalks. The city turned off the water and emergency workers arrived to drain the street. Then just when all seemed well, a sinkhole appeared, Dell recalled. Within three minutes, the street began to collapse.

“First one piece [of the street] fell in, then another, then another. That was really scary,” Dell said. “We didn’t know if it would take the whole street.”

Eight residences and five businesses were without water Thursday afternoon.