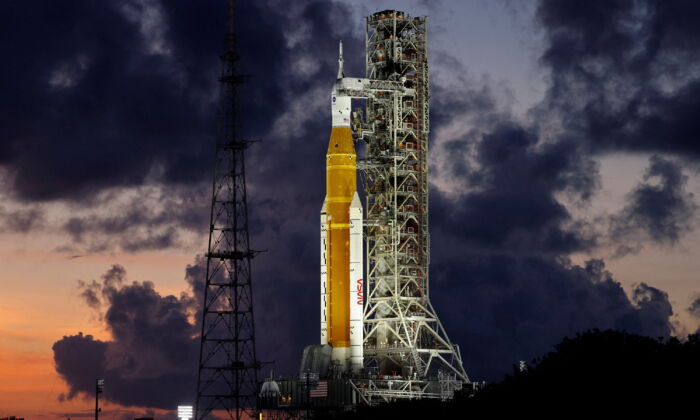 NASA is brushing off the dust of its almost 50-year moon exploration dry spell to begin a return to Earth’s nearest celestial body on Aug. 29.

While Artemis 1 will be unmanned and won’t land on the moon, it’s a big step toward getting astronauts back to the lunar surface, in the first in a series of increasingly complex missions designed to prove that manned, deep-space exploration is possible. The mission will test NASA’s new Orion Spacecraft, Space Launch System (SLS) rocket, and the updated ground systems at Kennedy Space Center (KSC) in Florida, NASA said.

Moreover, while getting astronauts back on the moon is an impressive endeavor, it’s not NASA’s end goal. Instead, the planned missions to the Moon are but stepping stones toward NASA’s ultimate objective of reaching Mars—a possibility, because of former President Donald Trump’s directive.

Back to the Moon and Beyond

In December 1972, NASA launched Apollo 17 for a 12-day manned lunar mission. The mission was a success and broke records for the longest spacewalk, longest lunar landing, and largest lunar samples brought back to Earth. It was also the last time NASA sent anyone to the moon.

Enter Trump and his Dec. 11, 2017, directive to NASA, specifying he wanted astronauts back on the moon.

“The directive I am signing today will refocus America’s space program on human exploration and discovery,” Trump stated.

“It marks a first step in returning American astronauts to the Moon for the first time since 1972, for long-term exploration and use. This time, we will not only plant our flag and leave our footprints—we will establish a foundation for an eventual mission to Mars, and perhaps someday, to many worlds beyond.”

Artemis 1 will lift off the Kennedy Space Center in Florida on Aug. 29 between 8:33 a.m. and 10:33 a.m. local time and make a 1.3 million mile round trip. The destination, according to NASA, is to complete a retrograde orbit around the Moon (meaning Artemis 1 will travel in the opposite direction of the Moon’s rotation).

If all goes according to plan, Artemis 1 will reach return speeds of up to 25,000 miles per hour, and splash down off the coast of San Diego on Oct. 10.

There are three primary objectives for the Artemis 1 flight, according to NASA, and they involve Orion, NASA’s new exploration spacecraft designed to protect humans in deep space exploration, and the SLS solid rocket booster, the largest and most powerful solid propellant booster ever built for flight, the space agency said.

A fourth additional object for NASA is demonstrating and testing the rocket’s capabilities and certifying things like Orion’s navigation system.

To accomplish the above, NASA said that after a successful liftoff, the SLS will fire five-segment boosters and separate after about two minutes. Then, the core stage will fire its four RS-25 engines for approximately eight minutes.

After jettisoning the boosters, the core stage engine will shut down and separate, leaving Orion attached to the interim cryogenic propulsion stage (ICPS), which will propel Orion toward the moon, NASA stated.

After the ICPS pushes Orion to leave the Earth’s orbit and travel to the moon, Orion will separate from the ICPS and use a course-correcting service module for the remainder of the trip.

During the seven-day trip to the moon, engineers on the ground will evaluate Orion’s systems. Once Orion reaches the moon, it will fly about 60 miles above its surface at its closest approach and use the moon’s gravitational force to complete the retrograde orbit, traveling about 40,000 miles past the moon—farther than any other spacecraft designed for humans has flown.

After successfully completing the retrograde orbit, Orion will use the moon’s gravity to return to Earth, where Orion will undergo its most important tests.

“The primary objectives of the Artemis 1 flight test are to demonstrate the Orion heat shield at lunar return re-entry conditions, demonstrate operations and facilities during all mission phases, and retrieve the spacecraft after splashdown,” NASA said.

Lockheed Martin, the prime contractor building Orion, said its life support systems will support long-duration missions, the radiation protection successfully protects against cosmic and solar radiation only seen in deep space, and the heat shield can withstand temperatures of 5,000 degrees Fahrenheit and speeds of more than 24,700 mph.

Additionally, Orion utilizes a unique communication and navigation system designed for traveling where there are no GPS or communication satellites. Lockheed said that Orion has “redundant systems,” meaning critical elements will remain operational if something goes wrong.

If Lockheed’s above claims prove true, and the SLS and Orion operate as intended, it’ll help further NASA’s goal of returning astronauts to the moon, a necessary step in NASA’s ultimate objective: Mars.

If Orion proves successful during the Aug. 29 mission, NASA plans to move on to its second step, Artemis II, a crewed mission.

Artemis II is scheduled to launch from Florida in 2023, and will, among other things, test Orion’s critical life support systems with astronauts on board. If Artemis II is a success, NASA plans to launch Artemis III in 2024, with the mission of getting a man and a woman on the lunar surface—the first time a woman will ever stand on the moon.

However, successfully landing a man and woman on the moon is only part of Artemis III’s objective. Artemis III is the start of NASA’s plan to launch a crewed mission every year, with a mission objective of establishing “surface capabilities.”

Moreover, during these yearly missions, astronauts will begin construction of Gateway, a space station that will orbit the Moon, and hopefully, according to NASA, be a pivotal step toward getting boots on the ground of the Red Planet.