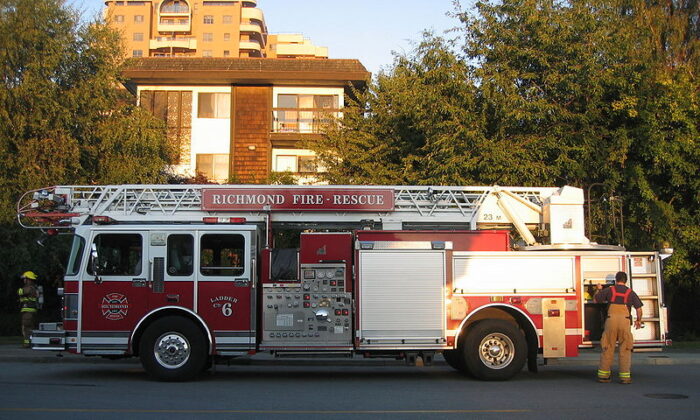 A fire truck of the Richmond Fire Department in a file photo. (Arnold C)
Canada

To date, the vast majority of decisions have sided with upholding employer's vaccine policies
By Jared Gnam

Nearly 40 City of Richmond workers in B.C. who were put on unpaid leave for not providing proof of COVID-19 vaccination have won the right to return to work with back pay, in a rare legal decision to date in Canada.

As decisions emerge one after another relating to the legal grounds for mandatory vaccination policies, the vast majority of arbitrators in Canada have sided with the employers.

But in a mediated resolution issued at the end of March, Richmond staff members who refused to comply with the city’s vaccine mandate were awarded back pay from Dec. 20—when they were first put on unpaid leave—to Feb. 21.

The resolution also allowed the 39 city workers, which includes nine fire firefighters, to return to work before the city lifted its vaccine mandate on April 8.

Three unions—IAFF Local 1286, CUPE Local 718, and CUPE Local 394, which represent the city’s firefighters, inside workers, and outside workers—first filed a grievance last October over the vaccine mandate imposed by Richmond city council.

“It’s obviously a difficult issue for everybody,” said Randy Noonan, the mutually agreed-upon arbitrator in the case. “At the end of the day, I had to make a decision on it. I had to hear a lot of evidence.”

Noonan on Jan. 12 had originally denied the three unions’ grievance application for “staying, limiting or altering” the City of Richmond’s vaccine policy.

Acknowledging that the issue is highly contentious and complex, he told The Epoch Times that he couldn’t discuss the details behind his original decision and the subsequent mediated resolution.

The B.C. labour arbitrator noted, however, that this is the first case in Canada he is aware of where unionized workers who refused to comply with employer vaccine mandates were awarded back pay after being put on unpaid leave.

In a review of 12 cases—10 from Ontario and one each from Alberta and B.C.—industry magazine Benefits Canada found that only two arbitrators, both in Ontario, ruled the employers’ vaccine policies to be unreasonable.

In both cases, the arbitrators struck down mandatory vaccination policies that involved unionized workplaces.

The first case involved the Electrical Safety Authority. The arbitrator decided the policy was unreasonable because it didn’t provide a COVID-19 testing alternative.

The second case involved a group of four long-term care homes. The arbitrator ruled that termination as a consequence of non-compliance violated the union’s collective agreement.

Arbitrator Gail Misra said the employer, Chartwell, failed to discuss with the union the significant changes made to its vaccination policy. She noted specifically the changes that would allow the company to terminate or place on unpaid leave employees who do not provide proof of vaccination or a medical exemption by a specified date.

However, she also said that at some point once the issue is clarified, the employer “will likely have just cause to terminate the employment of such an employee.”

Jim Wu, an employment lawyer for Forte Law in Vancouver, says he is receiving a lot of questions about workplace vaccine policies from both employers and employees.

In a blog post, he wrote that almost all of the cases that have made it through Canada’s court system have ruled that it is legal to terminate an employee who defies employer vaccine policies.

Wu noted that the cases tend to hinge on the specific facts of the employees’ dismissal, including whether the employers maintained communication and whether they had a very clear agenda as to why they were enacting a vaccine policy.

In a recent case involving the Toronto District School Board, the teachers’ union argued that the board’s vaccine policy infringes Section 7 of the Canadian charter, which states that everyone has the right to life, liberty, and security of the person.

However, the arbitrator ruled that the policy did not violate the charter, concluding that the school board’s vaccine policy was “an entirely reasonable exercise of management rights, subject of course to any individual claims respecting requested medical/creed exemption requests should they proceed.”

While most cases that have been decided on so far by arbitrators have involved unionized employees, Wu says more cases are still making their way through the court system, including three wrongful dismissal lawsuits in B.C.

In one case, a Vancouver pharmacist who had worked at London Drugs for 16 years is suing her former employer, alleging that the retail chain wrongfully dismissed her for not getting vaccinated for COVID-19.

The former employee claims in her lawsuit that London Drugs effectively wrongfully dismissed her because of the “unilateral” changes the company made to the terms of her employment as a result of the vaccination policy. That lawsuit is ongoing.

Wu says that court cases can take months or even years to go to trial, and that around 90 percent of all lawsuits settle out of court rather than proceed to trial.

Like most arbitrators, Noonan first ruled in January that the employer vaccine policy was ultimately reasonable because it was intended to reduce the risk of the spread of COVID-19 and therefore it was serving to protect employees’ rights.

In B.C., the issue has raised controversy this year as lawyers representing a group of psychologists and regional health officials pointed to evidence that vaccine mandates do not reduce transmission of the virus.

On Feb. 16, officials from Vancouver Coastal Health, in a letter to the University of British Columbia, highlighted evidence that COVID-19 can be spread in both the vaccinated and unvaccinated. It cited scientific data from around the world, including a study published in The Lancet in January.

The Epoch Times asked Noonan whether similar evidence was raised in the lead-up to the mediated resolution, or whether that information had a bearing on his decision, but he did not respond to the query.

The City of Richmond says that almost 99 percent of the city’s approximately 2,100 employees are vaccinated and that unvaccinated employees have returned to work.

Spokesperson Clay Adams said that workers who chose to use vacation time during their unpaid leave period will have it reinstated between Feb. 21 and April 8. Neither the back pay nor the reinstated vacation pay will affect the city’s budget, he added.