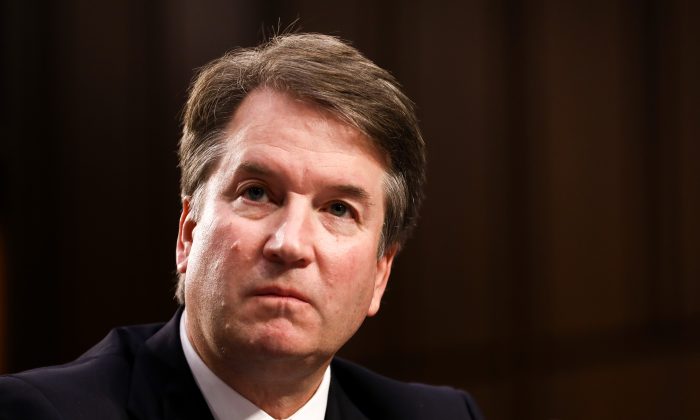 Supreme Court Justice Brett Kavanaugh at his confirmation hearing to serve as associate justice on the Supreme Court at the Capitol in Washington on Sept. 4, 2018. (Samira Bouaou/The Epoch Times)
US News

'Summer of rage' against conservative justices continues
By Matthew Vadum

Activists targeted Supreme Court Justice Brett Kavanaugh on July 6, driving him out of a popular Washington restaurant where he was enjoying an evening meal. The action is apparently part of the “summer of rage” that leftists have promised in protest of the court’s decisions.

Protesters massed outside Morton’s Steakhouse after learning Kavanaugh was inside, Politico first reported. The activists contacted the eatery’s manager demanding that the justice be given the boot because of his court rulings. It’s unclear how many activists were present.

Some activists urged people “to call the restaurant and denounce its hospitality toward the justice,” The New York Post reported.

For security reasons, Kavanaugh exited the restaurant through a back door.

Morton’s condemned the disruption in a statement to Politico.

“Honorable Supreme Court Justice Kavanaugh and all of our other patrons at the restaurant were unduly harassed by unruly protestors while eating dinner at our Morton’s restaurant,” the spokesperson said. “Politics, regardless of your side or views, should not trample the freedom at play of the right to congregate and eat dinner. There is a time and place for everything. Disturbing the dinner of all of our customers was an act of selfishness and void of decency.”

Responding to the Morton’s statement, Shut Down DC, which has been organizing protests at the home of conservative justices, threatened the steakhouse in a July 8 tweet. “No rights for us, no peace for you. Get [expletive] @mortons.”

“We hear Kavanaugh snuck out the back with his security detail. @mortons should be ashamed for welcoming a man who so clearly hates women,” it wrote.

Authorities foiled a June 8 attempt to assassinate Kavanaugh at his Maryland home. Nicholas John Roske, who reportedly said he wanted to kill the justice to prevent him from voting to overturn abortion rights and gun control laws, entered a not guilty plea after a federal grand jury indicted him.

Later that month, Mikeal Deshawn Archambault was arrested for threatening in a June 24 tweet to “kill everyone” at the Supreme Court with an AK-47 rifle.

Kavanaugh, a nominee of President Donald Trump, has been a lightning rod for criticism by some since his unusually contentious 2018 confirmation hearings. Psychology professor Christine Blasey Ford offered uncorroborated testimony claiming Kavanaugh tried to sexually assault her more than three decades earlier, when they were both high school students in suburban Maryland. Kavanaugh vigorously denied the allegations.

Even though Republicans believe that Ford’s claims were discredited by Senate Judiciary Committee counsel and sex-crimes prosecutor Rachel Mitchell, many Democrats still believe them and viscerally condemn the justice. Some congressional Democrats want to see Kavanaugh impeached and removed from the high court.

While the Biden White House has condemned violence and intimidation targeting the justices, the administration hasn’t expressed opposition to the ongoing demonstrations aimed at the court’s conservative justices.

On July 8, the same day that President Joe Biden signed an executive order designed to protect access to abortion-inducing pills and emergency contraception, the president excoriated the Supreme Court.

“The court and its allies are committed to moving America backward with fewer rights, less autonomy, and politicians invading the most personal of decisions,” he said. “We cannot allow an out-of-control Supreme Court, working in conjunction with extremist elements of the Republican Party, to take away freedoms and our personal autonomy.”

At the same time, U.S. Attorney General Merrick Garland has been widely criticized for refusing to enforce a federal law against activists who have allegedly been threatening and attempting to intimidate justices.

Federal law makes it a criminal offense to parade or picket “near a building or residence occupied or used by [a federal] judge, juror, witness, or court officer” with the “intent of interfering with, obstructing, or impeding the administration of justice, or with the intent of influencing any judge, juror, witness, or court officer, in the discharge of his duty.”

Shut Down DC is offering money to people to report the location of Supreme Court justices so they can be targeted for protest. The group tweeted on July 8 that it will pay $50 to “D.C. service industry workers” who report a sighting of Chief Justice John Roberts, Justice Neil Gorsuch, Alito, Barrett, Kavanaugh, or Thomas.

“We’ll venmo [i.e. a money transfer service] you $50 for a confirmed sighting and $200 if they’re still there 30 [minutes] after your message,” the tweet states.

Fox News host Tucker Carlson suggested people should fight back against the group.

“Antifa activists @ShutDown_DC are trying to harass Supreme Court Justices,” Carlson wrote in a July 8 tweet. “Everyone should flood their account until they give up.”