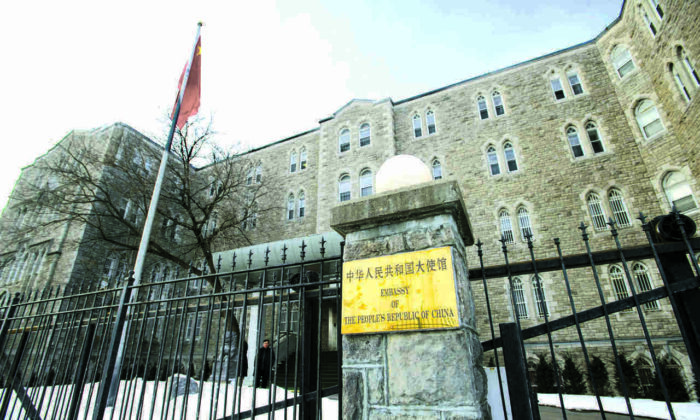 The Chinese Embassy in Ottawa in a file photo. (Sean Kilpatrick/The Canadian Press)
By Andrew Chen

The Chinese regime has likely established more unofficial overseas police stations in Canada than the three in Toronto identified in a report by a human rights NGO, a co-author of the report says.

Spain-based Safeguard Defenders published a report in September warning of the regime’s “long-arm policing” around the world through what’s been dubbed the “110 overseas police stations”—an operation named after the police emergency phone number, 110, in China.

Titled “110 Overseas: Chinese Transnational Policing Gone Wild,” the report identified 54 Chinese overseas police stations in 30 countries, including 3 in Toronto. The stations are all under the jurisdiction of two local-level police services in China—the Fuzhou Public Security Bureau in Fuzhou City, Fujian Province, and the Qingtian County police in Zhejiang Province, the report said.

Peter Dahlin, founder and director of Safeguard Defenders and co-author of the report, says that following the release of his organization’s findings, security police or related government agencies from North America and Europe have approached his organization asking “to sit down and have a briefing discussion” on the Chinese operations overseas.

“So they are certainly aware of it, at least in some countries,” Dahlin told The Epoch Times.

While the Chinese authorities say these police stations are created to better serve its overseas nationals, the report notes the stations have been used to “persuade” up to 230,000 Chinese nationals to “voluntarily” return to China to face criminal proceedings between April 2021 and July 2022.

“Persuasion to return” is a key method of the Chinese regime’s “involuntary returns” operations, which include its “Operation Fox Hunt” and the broader “Sky Net” campaign, according to Safeguard Defenders. Many of the targets for persuasion to return were overseas Chinese allegedly involved in telecommunication fraud, though the report said a number of non-suspects and their family members in China have also been targeted for police harassment and intimidation.

Dahlin said that in addition to the three stations in Toronto—two in Markham and one in Scarborough, whose locations were published in a Chinese state media outlet—there are likely other unofficial Chinese police stations either existing or being established in Canada, though they have yet to be discovered.

“We’ve also seen a [Chinese] government notice that said that 10 different provinces should launch these types of operations on a pilot basis,” he said, pointing to the report’s citation of a July 5, 2018, news release issued by Beijing.

“So, we have two of these operations uncovered [in Fujian Province and Zhejiang Province]. There might be eight more provinces doing this that could have their own stations, and we have not been able to track down that information yet. That’s why we keep saying that … we believe and we have good reason to think that there are more [overseas Chinese police stations].”

The news release is in relation to the Chinese State Council’s 2018 “Work Plan for the Supervision of the National Special Struggle Against Gang Crimes.” A Chinese state media outlet reported in January 2019 that Beijing had conducted a first-round one-month supervision training from July to September 2018 in the 10 provinces of Hebei, Shanxi, Liaoning, Fujian, Shandong, Henan, Hubei, Guangdong, Chongqing, and Sichuan.

Another report that year, in April 2019, said the regime had completed a second-round training for another 11 provinces, including Zhejiang Province where the Qingtian police service is located.

Given the large Chinese diaspora population in Vancouver, Dahlin said he would find it “very strange” if the city didn’t have at least one 110 police station.

Safeguard Defenders says its September report is part of its ongoing monitoring of China’s growing global transnational repression. Dahlin said it came on the heels of another report by his organization, titled “Involuntary Returns—report exposes long-arm policing overseas.”

That earlier report, published in January 2022, looked at the Chinese regime’s claim in December 2021 that its Sky Net operations, along with Operation Fox Hunt, have successfully brought some 10,000 “fugitives” back to China from around the globe since 2014, when Fox Hunt was launched as part of Chinese leader Xi Jinping’s anti-corruption campaign.

Those operations target what Dahlin described as “high-value targets.” Officially, Sky Net says it only targets economic criminals and officials accused of crimes like corruption or bribery, according to the Safeguard Defenders report, but Dahlin said Sky Net has been found to also target human rights defenders. Operations against high-value targets are run by the Chinese central police, whereas those involved in lower-level crimes like fraud—who are considered low-value targets—are tracked by the local Chinese police, he said.

“The most common method to do this is to persuade them to return ‘voluntarily.’ We’ve also had a number of cases where [Beijing] sent agents—Chinese police officers, undercover—to the target countries; we have a number of people in the U.S. being indicted for this,” he said.

A third way, Dahlin said, is to use kidnappings. He noted that his organization has identified 22 cases of kidnapping.

Although his organization hasn’t found any cases of direct kidnapping in Canada, Dahlin said that in Canada and the United States, the Chinese regime does “a lot more [of] sending secret agents to intimidate people and that type of operations.”

When asked about the severity of the Chinese overseas operations, he said the impact in Canada is “certainly worse than Europe.”

“Canada has such a significant Chinese diaspora community—much bigger than pretty much all of Europe together—so certainly, there’s a lot more people at risk in Canada,” he said, adding that Canada, the United States, and Australia are “the big three” destinations when it comes to Chinese asylum-seekers and relocation.