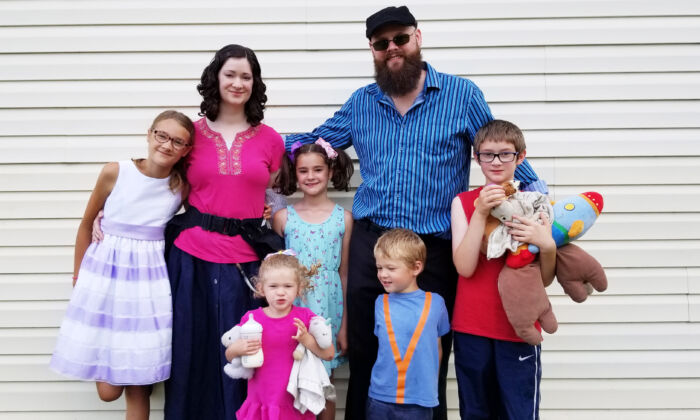 Despite a mother of five’s desperate appeal to the University of Michigan hospital for a life-saving heart transplant, the state-run facility won’t budge from its refusal to consider her for surgery until she is vaccinated against COVID-19.

In a recent, heart-wrenching email about her condition, Shier described how the pump that keeps her heart beating has become overwhelmed by bacteria that are no longer responding to the series of antibiotics she’s been prescribed by University of Michigan (UM) doctors.

As a result, Shier has been hospitalized repeatedly for blood infections. She and her husband, Ron, are worried that will eventually lead to sepsis, which can be fatal.

“It just feels like no one at UM cares what they are doing to us and to our kids,” Ron Shier told The Epoch Times.

Ron Shier, who works full time as a mental health counselor, said his children, who range in age from 3 to 11, are constantly worried that Mommy is “not coming home from the hospital.”

UM’s ties to Pfizer date back to at least 2008 when it purchased the pharmaceutical company’s giant Ann Arbor complex and all of its life science content.

According to a 2008 statement from the university, it quickly recruited 13 Pfizer scientists after taking over its facility with most of them still working for the university. Ten of the scientists specifically were hired to staff the UM’s College of Pharmacy.

Last year, Pfizer was among three companies that the university’s Tauber Institute for Global Operations chose to receive its annual longevity awards.

According to UM’s website, the award is given “in recognition” to companies “for their commitment to operations education through their active participation in Tauber team projects.”

Pfizer also remains a major employer in Michigan, with its largest manufacturing plant located in Kalamazoo, where it makes the prescription drug Paxlovid, an antiviral pill that the FDA approved last year for the treatment of COVID.

It also was sent to the eight-member Board of Regents, elected officials who govern the public hospital. None of them responded.

On July 29, Mary Masson, director of public relations at the university, released a one-line statement by email to The Epoch Times in response to Shier’s case, but refused to answer any questions, even refusing to provide The Epoch Times with her phone number.

“Michigan Medicine does not discuss pending litigation,” was the only response from the taxpayer-funded hospital.

The Epoch Times asked the hospital for a copy of its COVID vaccine-mandate policy, if it applied to transplant patients only, and under what circumstance it grants or considers granting a religious exemption.

The Epoch Times never inquired about any pending litigation.

Last month, the Pacific Justice Institute filed a court complaint on behalf of Shier and another university transplant patient against the college’s Board of Regents, seeking declaratory relief from its transplant center’s COVID vaccine policy and its refusal to consider both Shier and the other patient’s request for a religious exemption from it.

The other patient, who is in need of a kidney transplant, isn’t nearly as critically ill as Shier.

Both were on the list for a transplant but were removed after the university adopted a new policy that the COVID vaccine would be required in order to stay on the list.

The complaint charges that the regents “have violated their duty of care to the patients by imposing arbitrary and capricious dictates and effectively giving patients a choice to die or to submit to government-inspired diktats that are not for a legitimate medical purpose.”

Katie Shier told The Epoch Times she’s strongly opposed to the vaccine because she believes it’s dangerous and might cause her already frail heart, which is functioning at only 7 percent of normal capacity, to fail.

She said she believes their concerns are validated by the growing number of people who have reported experiencing heart problems after getting a COVID injection.

“It’s just an evil experiment on humanity,”  Shier said, “and I don’t want to be part of it.”