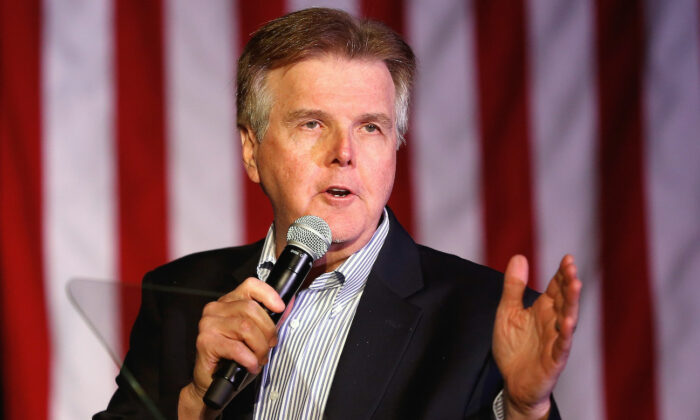 Texas Lt. Gov. Dan Patrick in Houston, on March 15, 2016, said removing tenure from Texas Universities will one of his priorities in the next legislative session, if re-elected. 2016. (Bob Levey/Getty Images)
Critical Race Theory

University Head Refuses to Back Down Over Tenure Battle

University of Texas President Jay Hartzell has told the school’s professors that he will defend tenure for faculty because removing it will “cripple Texas’ ability to recruit and retain great faculty members.”

Hartzell made the comment in a letter in response to Lt. Gov. Dan Patrick’s announcement last month that he would seek to eliminate tenure for new hires at all of the state’s public universities and add the teaching of critical race theory (CRT) as grounds to revoke a professor’s tenure.

The subject is certain to be an issue in the state, as Patrick is seeking reelection and has consistently vowed that ending tenure for Texas state universities will be a top priority in next year’s legislative session.

At stake is the decision of who will be the gatekeepers of what is taught in Texas schools—teachers and professors, or the University of Texas Board of Regents and the state’s voters.

Professors who are granted tenure—an indefinite appointment for distinguished university faculty that guarantees lifetime job security—generally are immune from termination, except for cause or extraordinary circumstances, according to the American Association of University Professors.

Patrick said Texans “are going to have a say in what the curriculum is.”

“This is right,” he said, because legislators “distribute taxpayer dollars” on behalf of the people of Texas.

Patrick was reacting to a resolution by the recent Faculty Council of the University of Texas declaring that the teaching of critical race theory was included in the “fundamental rights of faculty to academic freedom,” with a view to a professor’s ability to teach CRT and gender justice.

“I am outraged by the University of Texas at Austin faculty council’s 41-5 vote on a resolution in support of teaching critical race theory,” Patrick said. “I am further outraged that the faculty council told the Legislature and the UT Board of Regents, that it is none of their business what they taught.

“Tenured professors must not be able to hide behind the phrase ‘academic freedom,’ and then proceed to poison the minds of our next generation.”

“Students in our universities are inundated with critical race theory,” Trump said. “This is a Marxist doctrine holding that America is a wicked and racist nation, that even young children are complicit in oppression, and that our entire society must be radically transformed.”

Trump canceled the planned training of CRT by the Centers for Disease Control and Prevention and opposed the teaching of the New York Times’ “1619 Project” in public schools.

“Critical race theory is being forced into our children’s schools, it’s being imposed into workplace training, and it’s being deployed to rip apart friends, neighbors, and families,” Trump said.

The fight between Patrick and the University of Texas will continue, Hartzell indicated.

In his written statement, Hartzell said that tenure “allows for professors to explore controversial topics through their research and with their students without fear of repercussion for unpopular ideas.

“Tenure is important to Texas universities and removing it will not help.”

Patrick said, “Universities across Texas are being taken over by tenured, leftist professors, and it is high time that more oversight is provided.”