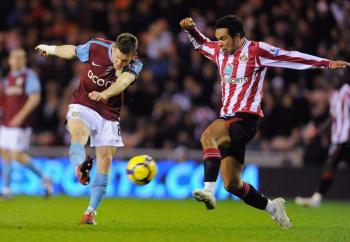 James Milner of Aston Villa (left) sends a rocket of a shot into the net. (Michael Regan/Getty Images)
Soccer

Rahul Vaidyanath
Journalist
Rahul Vaidyanath is a journalist with The Epoch Times in Ottawa. His areas of expertise include the economy, financial markets, China, and national defence and security. He has worked for the Bank of Canada, Canada Mortgage and Housing Corp., and investment banks in Toronto, New York, and Los Angeles.
View profile
Follow
biggersmaller
Print
Manchester United got back to their winning ways on Tuesday with a comfortable 3–0 win over Wolves. With the win, United ties first place Chelsea with 37 points atop the Premier League table, however the Blues have a better goal differential.

Wayne Rooney opened the scoring off a penalty shot in the 30th minute. Just less than 15 minutes later, central defender Nemanja Vidic made it two with a header that barely squeezed by American goalie Marcus Hahnemann. Antonio Valencia completed the scoring just after the hour mark after taking a no-look pass from Dimitar Berbatov and firing home.

“We can play better, that’s for sure,” said Manchester United manager Sir Alex Ferguson. “It wasn’t a bad performance.”

Vidic left the game early with a calf strain.

Aston Villa temporarily leapfrogged over Arsenal with a convincing 2–0 road win over Sunderland.

Emile Heskey latched onto a pass at the top of the 18-yard box and drove in the opening goal in the 24th minute.

American goalkeeper Brad Friedel had to work hard for the shutout. He came up with a remarkable save off a close-range blast from Andy Reid.

But the highlight of this game was James Milner’s rocket of a shot just after the hour mark that sealed the deal. Milner fought off a Sunderland defender and from about 24 yards out, fired one into the top corner.

“Everyone in the grounds could stand up and applaud it,” said Sunderland manager Steve Bruce.

Aston Villa followed up their impressive victory over United last Saturday with another strong performance. “Results are most important but the display was excellent,” said Martin O’Neill, Aston Villa’s manager.

In other Tuesday Premier League action, Birmingham climbed into sixth place with a 2–1 victory over Blackburn and Bolton beat West Ham 3–1 to move out of the relegation zone.

Four more Premier League games are on tap for Wednesday.