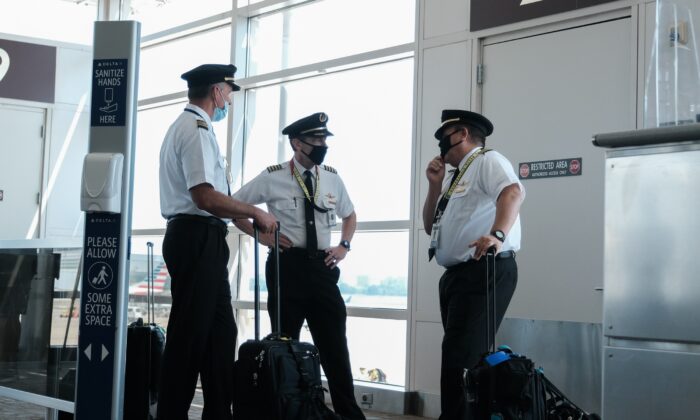 Pilots talk after exiting a Delta Airlines flight at the Ronald Reagan National Airport, in Arlington, Va., on July 22, 2020. (Michael A. McCoy/Getty Images)
By Jack Phillips

Allied Pilots Association President Eric Ferguson, in a letter (pdf) to the White House and Congress, said that some pilots “are unable to undergo vaccination for documented medical reasons, while others are reluctant to get vaccinated based upon concerns about the potential for career-ending side effects.” The Allied Pilots Association represents about 14,000 pilots with American Airlines.

As a result, Ferguson asked for an exemption to President Joe Biden’s pending vaccine mandate that he announced earlier this month, stipulating that private businesses with 100 employees or more get the vaccine or submit to regular testing.

“To ensure commercial aviation’s ongoing viability by avoiding a scenario in which airlines are forced to either offer unpaid leaves of absence or, worse, implement mass terminations of unvaccinated pilots, it is essential that an alternate means of compliance with the Executive Order be made available for professional pilots,” he wrote in his letter, which was also sent to the Federal Aviation Administration and other agencies.

The union boss then called on lawmakers and regulators to note “the specialized role that pilots play” in the travel industry and “allow for an alternate means of minimizing the risk of spreading COVID-19, such as regular testing or proof of natural immunity, while still allowing unvaccinated pilots to fly.”

A union representing thousands of Southwest Airlines pilots echoed the Allied Pilots Association’s argument in a statement to its members.

The Southwest Airlines Pilots Association’s “stance is that it is each pilot’s right to choose whether or not to get the vaccine,” the union wrote on Monday, according to reports. “We are also concerned that the Executive Order’s anticipated 60-day implementation period for mandatory vaccinations could result in labor shortages and create serious operational problems for Southwest Airlines and its peers.”

“Airlines generate a substantial portion of their annual revenue during the holiday period, with a great many travelers depending on us to get them to their destinations,” the Allied Pilots Association said. “Our nation’s airlines, and the traveling public, cannot afford significant service disruptions due to labor shortages.”

To date, United Airlines, Frontier Airlines, and Hawaiian Airlines have mandated COVID-19 vaccines for their entire workforces, although the companies will grant some exemptions. Delta Air Lines said it will tack on an additional $200-per-month surcharge onto the company’s health plan for unvaccinated employees.

The deadline for unvaccinated United Airlines workers to get their first shot was Monday. CEO Scott Kirby told CNBC that he believes around 98.5 percent of the company’s 67,000 employees are vaccinated.

Several White House and federal health officials have publicly suggested that all airline passengers may have to show proof of vaccination before they fly.

The Epoch Times has contacted Southwest Airlines and American Airlines for comment.