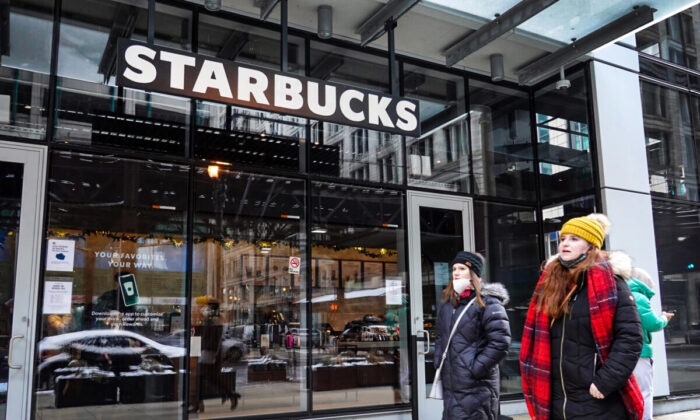 A Starbucks sign hangs above the entrance of one of the chain's coffee shops in the Loop in Chicago on Jan. 4, 2022. (Scott Olson/Getty Images)
Companies

In early February, Starbucks fired seven workers at a store in Memphis, Tennessee, in the midst of efforts to unionize company employees. While Starbucks claimed the firings were the result of violated policies, workers argued the policies were unclear.

The firings appear to be the latest spark in a growing fire that involves Starbucks workers who want to unionize and are facing pushback from the corporation. The first corporate Starbucks store unionized in Buffalo, New York, in December 2021, after executive-level Starbucks officials traveled there seeking to deter the campaign.

On Jan. 10, another Starbucks store in Buffalo unionized.

Now workers at more than 50 stores in 19 states across the country have considered unionizing—a number that’s too large to make it possible for high-profile Starbucks figures to visit each location individually.

“Memphis workers are calling on partners around the country to support them by organizing more stores across the nation,” Starbucks Workers United, which has a Twitter account with more than 30,000 followers, wrote in a Feb. 9 tweet. “We are organizing Starbucks partners coast to coast to stand united!”

“Unionization in the fast-food industry has been threatened for a long time,” David D. Schein, president and general counsel at Claremont Management Group, a management and HR consulting firm in Houston, told The Epoch Times. While most fast food sites are franchised, the Starbucks locations in the United States are generally corporate-owned.

Since it costs time and money for unions to organize, it may not be as effective to unionize each location individually. Given that, “the unions might focus on organizing all or a large group of the outlets, and not just one or a small handful,” Schein said.

Even if more stores unionize, the overall benefits may not be significant for workers. The fast food industry tends to provide entry-level jobs, and workers are often transient.

“The average QSR [Quick Service Restaurant] brand may have only one to two full-time employees with another 12 to 15 that are part-time,” Robin Gagnon, co-founder of We Sell Restaurants, the nation’s largest business broker franchise focused exclusively on the sale of restaurants, told The Epoch Times. Even full-time employees typically leave within a year. With so much turnover, if employees join a union, they might not reap long-term benefits.

In October 2021, Starbucks announced wage increase schedules for U.S. hourly employees. It stated that by summer, U.S. hourly employees will average nearly $17 an hour, with a range of $15 to $23 for baristas. If workers unionize, it isn’t clear how much they will be able to further raise wages, as the fast-food industry tends to operate with low margins.

“Like all ideas, this one appears to have momentum now, but that should be viewed in the context that union membership overall shrunk dramatically last year,” Gagnon said. In 2021, union membership dropped by almost 250,000 members, according to the Bureau of Labor Statistics.

In addition, “unions bring about work rules as part of most of their Collective Bargaining Agreements,” Schein said. “A counter person might be classified as such and refuse to clean tables or put out the trash.” As restaurant owners deal with issues such as labor shortages, they may fight against arrangements that limit the areas in which their employees can work.

Those seeking union support for restaurant workers may soon face the realities of other trends such as automation and robotics. Restaurants are beginning to incorporate more of these technologies, which tend to focus on back-of-house tasks that include scheduling and inventory. Bill Bellissimo, a restaurant technologist and founder of CrunchTime, a restaurant operations platform, estimates that over half of restaurant operators will integrate automation technology in 2022.

“This is a win-win because while robots don’t mind unfulfilling tasks, smoothly running software gives management more time and money to create a less overwhelming workplace; ultimately fostering an environment for retaining more loyal employees,” he told The Epoch Times.

In the short term, however, workers could view the implementation of automated technologies as a threat to their jobs.

“Education about the benefits versus the costs provided by the union is the most powerful anti-union messaging a restaurant owner can deliver,” Gagnon said. For instance, if $20 is taken out of an employee’s paycheck and given to the union, the employee may have to reduce their living expenses. They should also be aware of the perks they will receive from sending in the $20.

“Franchisors and owners have never been more aware of the needs of the employee and as focused on retention and engagement than in the current labor market,” she said. “The marketplace is teeming with new ideas for benefits, support, education, and increases in wages for the industry.”