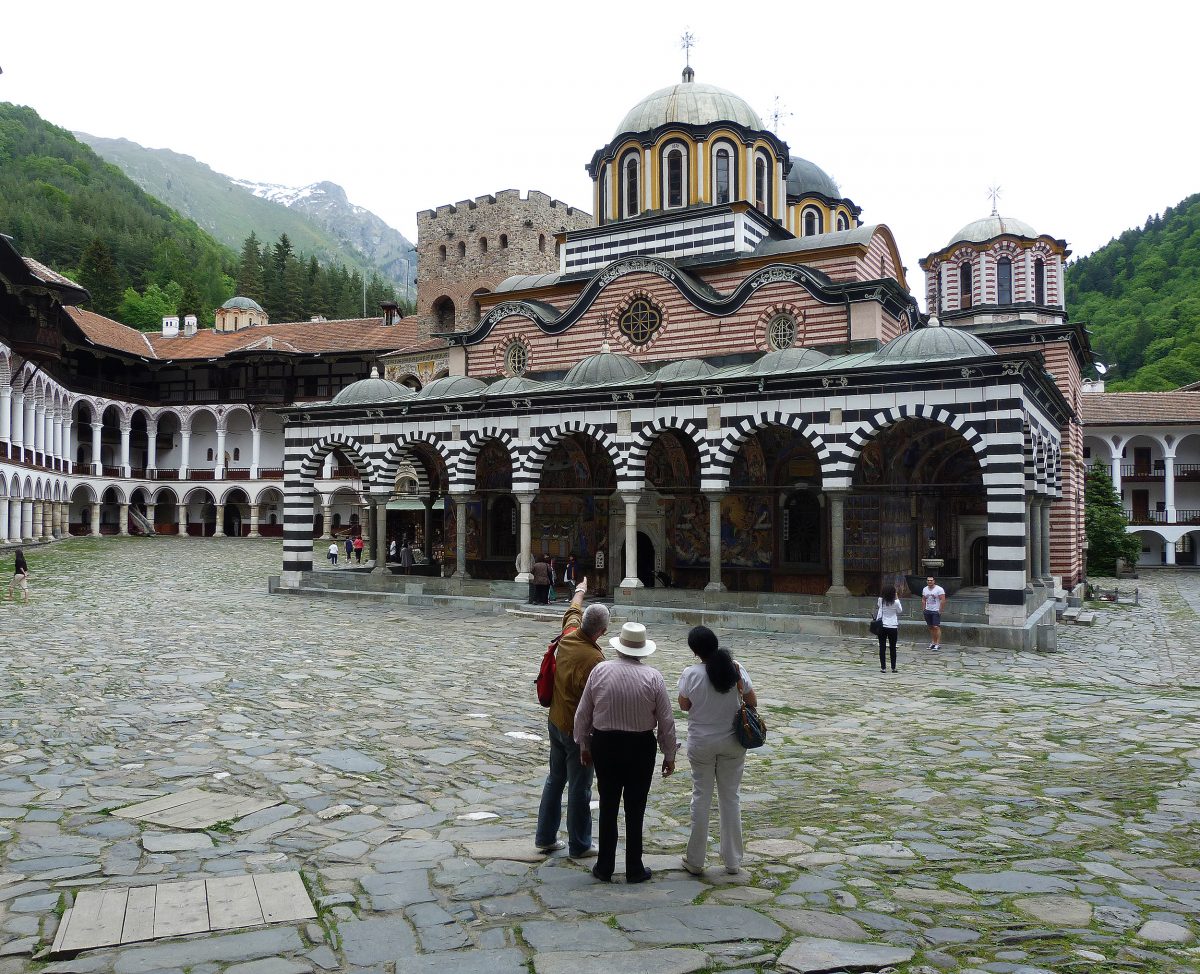 Rila Monastery, one of Bulgaria’s most important spiritual and cultural centres. (Barbara and Manos Angelakis)
Travel

In the footsteps of the ancients
BY Barbara Angelakis TIMESeptember 16, 2014 PRINT

Due to its coveted Eastern European location, it is not surprising that Bulgaria “hosted” so many civilizations and its borders shifted so many times.

Not wanting to lose a moment of precious time, we dropped our bags at the Arena di Serdica Hotel which was built over a 2nd–3rd century Roman amphitheatre and left to see one of Bulgaria’s greatest treasures, Boyana Church, located in a fragrant pine forest in the village of Boyana.

Also in Boyana is the National History Museum with its huge collection of cultural artifacts spanning prehistoric times to the present. Noteworthy is the large exhibit of the Thracian Golden Treasure, which contains the earliest known gold and silver objets d’art.

Surely the high point of any visit to Bulgaria is a stop at both this museum and the Archaeological Museum in Sophia, the oldest museum in the country and repository of the Valchitran gold treasure dating back to the 14th century BCE. Many of the artifacts are wine vessels, which is not surprising since Thracians were very fond of the brew and considered wine a divine gift to be lavishly consumed so as to achieve union with their deities.

The Thracian civilization was tribal in nature and inhabited a vast area in Eastern Europe, from the Carpathian Mountains to the Aegean Sea. The people never developed a written language, and what we know about them is mainly from Greek historians, specifically Herodotus (484-425 BCE), who wrote of their customs, religious beliefs, birth, marriage and burial practices. However, he wrote in a somewhat disdainful manner and heavily skewed by the Greek attitudes of the day.

Herodotus talked about a brutal primitive society that believed in immortality and lamented the birth of a child, loudly proclaiming all the possible misfortunes s/he could face in a lifetime, while celebrating death with gladness and rejoicing for the happiness the deceased person would soon encounter.

Some tribes were allowed to take many wives. When a man died, the wives viciously fought to decide which one had been the favourite and when one was finally agreed upon, with great rejoicing she was dispatched by her closest relatives and buried along with her dead husband.

Next day we left for Villa Gella, a luxury retreat in the Rhodope Mountains and our home for the next few days. On the way we stopped at Plovdiv, a thriving modern city , which is also one of the oldest in all of Europe—possibly dating as far back as the 6th millennium BCE. It already existed when Philip II of Macedonia (Alexander the Great’s father) conquered the area in 342 BCE and named the town Philipopolis after himself.

The original settlement was established at the apex of the hill and is a must-visit—that is if you can persuade a cabbie to take the torturous drive up the hill or if your legs have the stamina to provide their own transport. Luckily, we secured a ride with a cab that looked, and drove, as if the kindly proprietress gave in to many a pleading tourist.

Not to be missed in Plovdiv is one of the world’s best-preserved Roman amphitheatres. Unearthed in 1972 after a freak landslide, the ancient theatre originally held 6,000 spectators. After restoration, it once again offers theatrical and musical performances with the same perfect acoustics enjoyed over 2,000 years ago.

Next we headed toward the Valley of the Thracian Kings, the mysterious region that the Greeks believed to be the birthplace of Dionysus, the god of wine. It’s a vast area pocked with burial mounds, many of which are still unexplored.

We visited the World Heritage tomb in the town of Kazanlak that graphically depicts the funeral tradition for royal or noble deaths, which is precisely as described by Herodotus. The original tomb is too fragile to accommodate visitors but an exact replica has been constructed next to it that is open to the public for a small fee.

From the valley, we drove up into the Rhodope Mountains, which provided endless scenic views as we wound our way on a two-lane highway. After a warm welcome at Villa Gella and a delicious dinner, we were entertained by a traditional bagpiper who claimed the bagpipe originated in Bulgaria.

In the morning we headed to the Devil’s Throat, a huge cave that the roaring river hollowed-out under the mountain. Legend claims it is the entrance to the underworld that Orpheus (a Thracian Prince) entered to bargain for the life of his beloved Eurydice.

The way into the cave is slippery and steep with handholds at the most treacherous spots. We descended past the leakage in the wall where Orpheus, fearful that Eurydice was no longer following him out of Hades, foolishly turned, only to see her lost to him forever. This celebrated place is called “Orpheus’s tears.”

Once we reached the bottom of the cave with the thunderous raging river below our feet, we were told a 240-step staircase would lead us out to the natural entrance of the cave… or we could simply retrace our path, and climb a mere 140 steps—piece of cake! We finally exited the dark, dank, cave congratulating ourselves on escaping Hades’ wrath. Too bad Eurydice did not fare as well.

Next day we drove to another UNESCO site, the Rila Monastery, located in one of Bulgaria’s highest mountains and regarded as a spiritual, educational, and cultural centre. The fascinating story of Rila recounts the life of a 10th century hermit called Ivan.

Ivan lived in a cave and subsisted solely on herbs—some say he was crazy and tried to embalm himself—others say he devoted his life to fasting and prayer. Either way, he somehow survived and began to treat and heal the locals with the herbs that had sustained him during his period of seclusion.

Rila, the monastery he founded, is a spectacular expression of devotional iconography—the buildings are painted inside and out with Biblical scenes by Orthodox monks. The monastery, which is still active today, has significant spiritual and cultural importance for the country, attracting large numbers of visitors every year.

During this trip we visited only a small percentage of the vast riches of Bulgaria and we look forward to a return visit to continue our exploration of “Undiscovered Bulgaria.”

To get to Bulgaria, we flew on British Airways from New York with a stop-over in London to Sofia arriving early with the whole day ahead of us. Visit: www.BritishAirways.com

In Sofia, we stayed at the Arena di Serdica, a five star hotel located in the centre of the city within walking distance to all attractions. The hotel lobby is part reception, part authentic antiquity open to the public as a free walk-through museum. Visit: www.arenadiserdica.com

Villa Gella is a family run, fully serviced, authentic destination unto itself. Visit: www.villagella.comBarbara Angelakis is a seasoned traveller and writer based in the New York City area. To read more of her articles, visit LuxuryWeb Magazine: www.luxuryweb.com