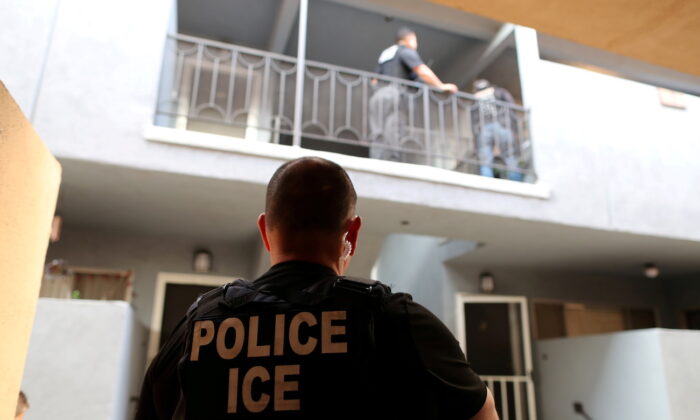 U.S. Immigration and Customs Enforcement (ICE) announced on May 27 that an undercover operation targeting commercial human trafficking, including sex trafficking, had led to the arrests of 43 individuals.

The operation, in which officials worked alongside Homeland Security Investigations (HSI), was dubbed “Spring Fling” and targeted alleged sexual predators in Arizona, focusing on hotel prostitution and street prostitution enforcement, ICE said in a press release.

HSI joined the Scottsdale Police Department Human Exploitation and Trafficking (HEaT) Unit and the police departments from Phoenix, Mesa, Tempe, Gilbert, and Surprise, along with Arizona State University Police Department for the operation.

Officials said that the suspects allegedly solicited or brokered deals for various sex acts before being apprehended. The majority of those arrested were charged with prostitution.

These latest arrests come shortly after law enforcement officers were able to locate and recover 70 missing children, most of them in West Texas, following a three-week operation involving multiple agencies.

Known as “Operation Lost Souls,” the police action ran from the end of April through mid-May in El Paso, Midland, and Ector and Tom Green counties in Texas.

The missing children ranged from 10 to 17 years old and were victims of sex trafficking and physical and sexual abuse. Many of them were runaways.

Although a majority of the children were located in West Texas, some were also recovered from the Dallas–Fort Worth area, as well as the state of Colorado, and Ciudad Juarez, Mexico. The agencies provided victim services and counseling to the recovered children and their families.

“Operation Lost Souls exemplifies Homeland Security Investigations’ commitment to protecting the public from crimes of victimization. In this case, we are looking out for our children – our community’s most precious resource,” said HSI El Paso Deputy Special Agent in Charge Taekuk Cho.

“HSI is committed to continue working with our law enforcement partners to locate, recover and help missing children heal, while ensuring that perpetrators are held responsible for these heinous crimes and brought to justice.”

According to the latest data from the National Human Trafficking Hotline (NHTH), 10,583 cases of human trafficking were reported in the United States in 2020, of which sex trafficking marked the highest number of cases.

The International Labour Organization estimates that there are 24.9 million victims of human trafficking and exploitation around the world, with women and girls accounting for 99 percent of victims in the commercial sex industry.

In February 2022, Attorney General Merrick B. Garland announced the release of the Justice Department’s new national strategy to combat human trafficking, which aims to enhance the department’s capacity to prevent trafficking from taking place and prosecute trafficking cases while supporting and protecting victims and survivors.