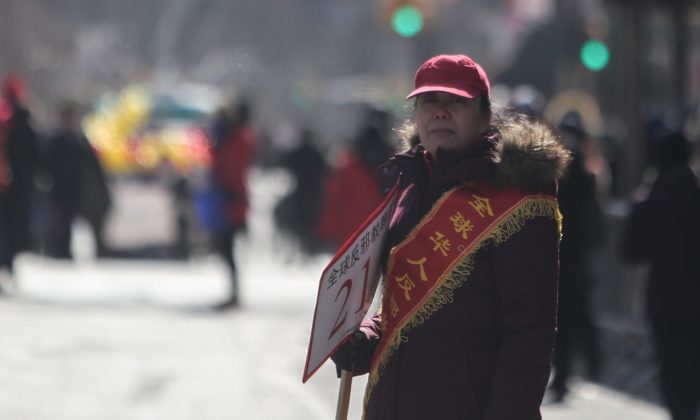 NEW YORK—Every year a wide variety of community groups come together to celebrate the Chinese New Year in Flushing’s Chinatown. A colorful procession of floats and performers—drummers, lion dancers, celestial maidens—move through the streets. But for the last few years, a group focused only on inciting hatred has also made its presence known—and according to secretly-recorded footage, they get paid for it.

“We’re the Huasheng Marching Band,” says a man in a secretly recorded audio last week. “We get paid $100 up front when we arrive to take part, and then another $10 for food. We get paid every year. If we didn’t get paid, are we going to come out? We come and play a bit for money, then go home.”

The band accompanied the Chinese Anti-Cult World Alliance, which dressed in red and focused on harassing practitioners of Falun Gong, during the New Year parade on Feb. 13. Falun Gong is a traditional spiritual practice that has been persecuted in China since 1999. CACWA is widely suspected of having close ties with the Chinese consulate in New York, part of whose mission it is to suppress the voice of groups that are deemed dissident by the Chinese authorities.

Falun Gong practitioners, who raise awareness about the abuse, torture, and organ harvesting against them in China, are one of the major targets for China’s diplomatic outposts. The practice itself involves performing five exercises and adhering to the principles of truthfulness, compassion, and tolerance. It is believed to have become a target by the Chinese state in the late 1990s because of the number of people practicing it, and their independence from the regime’s control.

The use of astroturfing techniques—deploying groups that appear to have no relation to the government, but which are in fact supported by the Party, and push a Party-line—is a well-known modus operandi of the Chinese Communist Party. Such techniques have been used expertly by the Party since the Civil War years in the 1930s and 1940s in China. In 2008 the Chinese consular general, Peng Keyu, was caught in a secretly-recorded telephone call boasting about how he had organized angry mobs to besiege Falun Gong on the streets of Flushing.

New Tang Dynasty Television, an independent Chinese-language broadcaster based in New York City, made the secret recording of the Huasheng band member this year. Huasheng is one of China’s official bands based in the United States, according to another secretly recorded interview by NTD last year.

The NTD reporter even followed the band members, and the CACWA group, as they bundled out of the cold and into a large Chinatown restaurant for their lunch banquet.

Li has gained a reputation for her virulent propaganda against Falun Gong, which largely copies the official anti-Falun Gong propaganda spread in China by the Communist Party. One of the Party’s most well-known lines is to compare practitioners of Falun Gong to vermin, or a threat to public security who must be struggled against and eliminated.

In March 2013, 13 New Yorkers filed a lawsuit accusing members and supporters of CACA of violating the freedom of belief of those who practice Falun Gong (11 of the plaintiffs are adherents of the discipline). Days before the parade in Flushing this year, the United States District Court for the Eastern District of New York released a 28-page decision rejecting the motion, filed by counsel for Li Huahong, to dismiss the case.

“I have always said that what the Chinese Communist Party has committed against Falun Gong is genocide,” said Ye Ning, a human rights lawyer in the United States, in an interview with NTD.  “The so-called Anti-Cult Alliance is purely an expansion of the Party’s genocide overseas.”