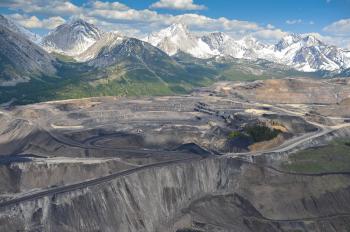 Decades-long concerns over energy and mining development proposals near a UNESCO World Heritage Site on the Canada-U.S. border have prompted the agency to launch a fact-finding mission to investigate potential threats to the region.

The committee noted that potential coal mining and coalbed methane extraction within the unprotected Flathead Valley in British Columbia, which lies west adjacent to Waterton-Glacier, could threaten water supplies and the broader ecosystem spanning the area.

“This ecosystem has the highest density of grizzly bears in the interior of North America, the highest diversity of plant species, with over 1,000 flowering plants alone. It’s one of the most important grizzly bear and carnivore habitats in the Rocky Mountains,” said Ryland Nelson, program coordinator with Wildsight, a southeastern B.C.-based conservation group.

“We’ve been asking B.C. for over 30 years not to mine in the Flathead River Valley. We’re asking that B.C. change their land use plan so that it does not allow mining on the headwaters of a World Heritage Site,” he said.

The mountaintop removal coal mining being proposed “would remove the large mountaintop and dump what’s not coal into the valley,” said Chloe O’Loughlin, executive director of the Canadian Parks and Wilderness Society’s B.C. chapter.

The open pit mine would send great amounts of heavy metals and runoff into the Flathead River and downstream into the neighbouring peace park, according to Mr. Nelson.

Flathead also falls under a conservation initiative covering the region from Yellowstone National Park to Yukon Territory, “protecting that area of the spine of the Rockies so that animals can go north-south to migrate,” Ms. O’Loughlin said.

The world’s first “international peace park,” Waterton-Glacier is a protected area formed in 1932 from a merger of Waterton Lakes National Park in Alberta and Glacier National Park in Montana. It serves as a symbol of peace and friendship between the two countries.

UNESCO designated both parks as biosphere reserves in the 1970s and the entire peace park a World Heritage Site in 1995.

The World Heritage Committee has also asked Canada and the U.S. to prepare a joint report on all Flathead resource development proposals as well as residential, industrial, tourism, and other developments in the area and their cumulative impacts.

A Flathead project to be undertaken later this month by a group of renowned conservation-minded photographers may serve to further efforts to protect the region.

The International League of Conservation Photographers (ILCP) , a group that believes “awe-inspiring photography is a powerful force for the environment,” will be sending a team to capture images of the region’s striking beauty and the challenges it faces.

Garth Lenz , a Victoria, B.C.-based award-wining photojournalist and an ILCP fellow, recently returned from a scouting trip in preparation for the mission planned for July 16 to 29.

“They really need to look at the incredible natural values of this area. It is just an incredible sanctuary for wildlife and biodiversity, plants and aquatic life, and really quite remarkable on a global scale,” said Mr. Lenz.

“The ecological integrity of those neighbouring national parks is very definitely under threat if the Flathead Valley does not receive protection and there aren’t assurances there won’t be industrial developments there in the future,” he said.

Mr. Lenz is coordinating the mission, which the Arlington, Virginia-based ILCP calls a RAVE, an acronym for "Rapid Assessment Visual Expedition." On the Flathead RAVE , in a short period of time his small team of specialized photographers, writers, and cameramen will compile a comprehensive visual portrait of the conservation issues surrounding the Flathead.

As the world moves to more renewable forms of energy, he said, to squander a priceless wilderness area with fossil fuel development “is just incredibly short sighted.”

She said the Flathead was chosen for a RAVE because it’s an area that can easily be protected and continue to be a revenue source for eco-tourism and recreation.

“The proposed new developments are massive,” Ms. Mittermeier said, and the images will help “bear witness to the beauty of a place that might change very quickly, so that people can make informed decision.”

The images will help people “realize what that kind of development would look like, as opposed to talking about it in an abstract way,” added Mr. Lenz.

From his scouting trip Mr. Lenz brought back stark images of mountaintop removal coal mining in Elk Valley, just northwest of Flathead Valley, showing the enormity and scale of that type of industrial development.

The Elk Valley mine, owned by Teck Mining, produces about 2 million tons of processed coal annually and is expected to run out of economically mineable coal within the decade, said Wildsight program manager Casey Brennan.

A highly controversial recent coal mine proposed for the Flathead by Cline Mining is estimated to produce about the same capacity, he said.

Neither Cline Mining nor the Intergovernmental Relations Secretariat, the B.C. provincial government department that’s handling media enquiries on the issue, answered to requests for comment by deadline.

The environmental coalition is calling on Canada to create a national park in the lower one-third of Flathead Valley and a wildlife management area in the rest of the valley and adjoining habitat.

Parks Canada has already included Flathead Valley in its plan to expand Waterton Lakes and consequently the international peace park, but needs approval from the B.C. government.

“The world has their eye on B.C. to see if they will be doing their part in protecting this ecosystem,” said Mr. Nelson.

When the 2010 Winter Games open in Vancouver next February, “what a great Olympic legacy that would be to see the U.S. and Canada standing together and saying we’re expanding the world’s first international peace park as a sign of our commitment for peace,” Ms. O’Loughlin said.

Ms. O’Loughlin noted that, just like Banff in Canada, the Flathead is “the icon of wilderness in the U.S.”

During his presidential campaign, Barack Obama described Glacier National Park and Flathead River as “treasures that should be conserved for future generations.”

Recently as many as 53,000 people across North America wrote letters to the B.C., Canadian, and U.S. governments calling for protection of Waterton-Glacier in light of the ongoing resource development proposals beyond its borders.

Ms. Mittermeier is a Mexican citizen who went to summer camp in Canada every year as a child.

For more information about the Flathead region and the campaign to protect it, please visit the "Flathead Wild" website at www.flathead.ca .