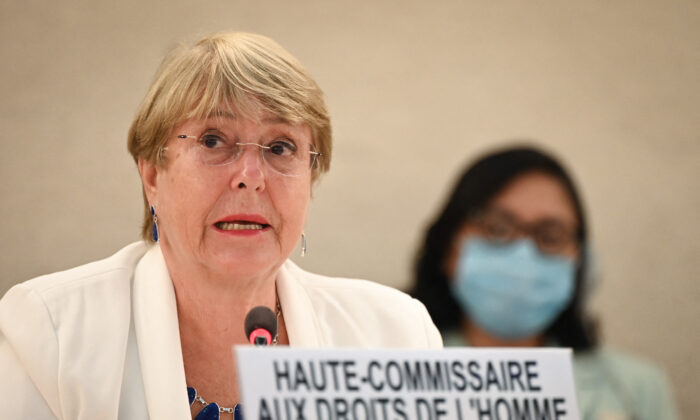 U.N. High Commissioner for Human Rights Michelle Bachelet delivers a speech at the opening of a special session of the U.N. Human Rights Council on Afghanistan in Geneva, Switzerland, on Aug. 24, 2021. (Fabrice Coffrini/AFP via Getty Images)
China Human Rights

The U.N. is neglecting the Chinese Communist Party’s (CCP) human rights abuses because of Beijing’s diplomatic and financial influence over the global body, according to whistleblower Emma Reilly.

“There is an actual policy that the High Commissioner for Human Rights, the secretary-general, and various other senior officials do not meet … with Uyghurs, Tibetans, Taiwanese, Falun Gong, anyone that might upset China,” Reilly, a human rights attorney and former U.N. employee, told Epoch TV’s “China Insider” on Feb. 9.

Reilly is a whistleblower who exposed the U.N. Office of the High Commissioner for Human Rights (OHCHR) for handing the names of dissidents and human rights activists to the Chinese regime, violating the Human Rights Council’s rules for their protection.

“That resulted inevitably in the Chinese government sending police to people’s family homes, the arrest of people’s family members, being forced … to tell them …  [about] their international advocacy,” she said. “Some truly horrible stories of torture [emerged as well].”

In 2013, Reilly, who worked at the OHCHR, reported this practice to her superiors and other U.N. offices, but to no avail. As a result, she faced retaliation and attempts to silence her within the U.N., she said. She was eventually fired in November 2021.

The scandal came amid rising concerns over the CCP’s growing dominance at the U.N.

According to Reilly, the U.N. has been dragging its feet on a report on China’s human rights abuses against Uyghurs in Xinjiang, China. The OHCHR stated in December 2021 that it hoped to publish its report in the coming weeks and that there had been “no concrete progress” in long-running talks with Chinese officials on a proposed visit.

However, Reilly believes that the visit isn’t necessary to finish the report.

“There’s enough evidence outside of China to declare that it’s a genocide [against Uyghurs]. We had the Uyghur tribunal [and] a number of parliaments to declare the genocide. The evidence is very clear, particularly as regards things like … the forcible sterilization of massive numbers of the population,” she said.

The CCP’s campaign against Uyghurs in Xinjiang has been labeled a genocide by human rights groups, as well as by several nations. This includes both the former and current U.S. administrations, as well as the parliaments of Canada, The Netherlands, Lithuania, Belgium, the Czech Republic, and the UK.

An independent people’s tribunal, known as the Uyghur Tribunal, ruled in December 2021 that the Chinese regime has committed genocide against ethnic Muslim minorities in Xinjiang through an array of repressive acts that include mass internment, family separation, sterilizations, and forced labor.

“I think when the genocide is on course … and you’re the secretary-general of the United Nations, just maybe ask for the genocide to stop and not just for a guided tour of it,” Reilly said.

According to the whistleblower, the U.N. Human Rights Council and the OHCHR try to avoid criticizing China. She said U.N. High Commissioner for Human Rights Michelle Bachelet hasn’t condemned human rights abuses against the Uyghurs or the practitioners of Falun Gong, a spiritual practice in which adherents have been systematically persecuted by the CCP since 1999.

“If you …  look at a lot of the reports that come out in the press that says, ‘The U.N. said this about China’s human rights record,’ it’s always an independent expert that said that. So, it’s not actually someone from the U.N. It’s a person who is independent from the U.N., but appointed as an expert in a particular area to look into that,” Reilly said.

Reilly believes there are two reasons behind the special treatment that China receives from the international body: Beijing’s diplomatic and financial influence.

Chinese diplomats regularly exert pressure on U.N. employees in an attempt to influence the content of their reports on human rights abuses, according to the attorney. She said China will have access to the upcoming Uyghur report before it’s published.

Regarding financial influence, Reilly said countries that are part of China’s Belt and Road Initiative (BRI) tend to speak in favor of Beijing at the 47-member Human Rights Council, the U.N.’s highest body for human rights.

BRI is Beijing’s massive infrastructure investment project that serves to expand the CCP’s political and economic influence worldwide. The plan has come under scrutiny in the West and has been described as “debt-trap diplomacy” that saddles developing countries with unsustainable debt levels.

Reilly also questioned Bachelet’s impartiality regarding China, noting that when she served as president of Chile, she was a regional representative for BRI. In a BRI forum in 2017, Bachelet was cited as praising Beijing’s initiative, the Chilean Ministry of Foreign Affairs reported.

“It’s not like she entered the Office of High Commissioner for Human Rights and suddenly forgot her past.”

Senior U.N. officials have been promoting the BRI, according to a report by Foreign Policy. In particular, Secretary-General António Guterres has praised BRI, emphasizing the “alignment of the Belt and Road Initiative with the [U.N.] Sustainable Development Goals.”

In 2016, China signed an agreement with the U.N., taking on the commitment to invest $20 million annually for 10 years in its U.N. Peace and Development Trust Fund.

Reilly described this pledge as a “slush fund, to promote the Belt and Road initiative, but as a jointly run [initiative] by António Guterres’s office and the Chinese government.”

“Now, they obviously think they’re getting something out of that. And I would suggest that that thing could be his silence,” she said.

The Epoch Times contacted Guterres, inviting the secretary-general to an interview on the topic. However, he declined on the grounds of not wanting to interfere with negotiations between the high commissioner and Chinese authorities relating to a visit to Xinjiang, saying that he didn’t want “to undermine the possibility of the credible mission” to the region that he had requested.

The OHCHR didn’t respond to a request for comment by press time.

Alex Newman contributed to this report.