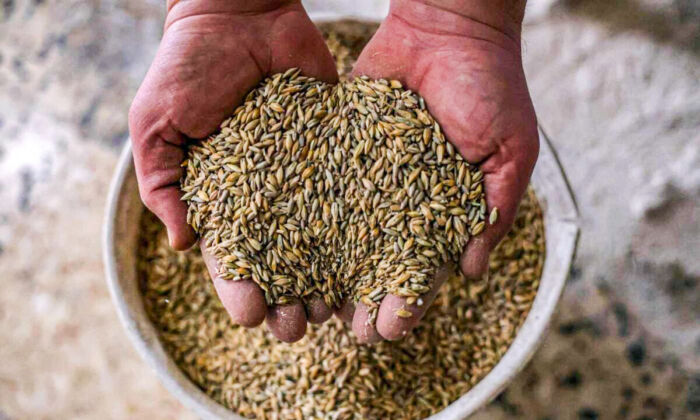 A Palestinian worker holds wheat grains at traditional a wheat mill, in Rafah, in the southern Gaza Strip, on March 21, 2022. Russia's invasion of Ukraine could mean less bread on the table for many countries where millions already struggling to survive. (Said Khatib/AFP via Getty Images)
Russia-Ukraine War

The U.N. food chief on Tuesday warned that Russia’s Ukraine invasion will have a global impact “beyond anything we’ve seen since World War II” and that the war has created “a catastrophe on top of a catastrophe.”

“We would have never dreamed anything like this would be possible,” David Beasley, executive director of the U.N. World Food Program told the U.N. Security Council.

Already high food prices are skyrocketing, said Beasley, because many of the Ukrainian farmers who produce a significant amount of the world’s wheat are now fighting Russians.

The U.N. Food and Agriculture Organization warned earlier this month of a looming global food crisis, with supplies of crucial staple crops threatened amid the ongoing conflict. Russia and Ukraine are key exporters of grain, supplying nearly 30 percent of wheat and nearly 20 percent of corn in the global market.

Prior to Russian President Vladimir Putin’s invasion of Ukraine on Feb. 24, Beasley said his agency was feeding 125 million people globally.

The agency has now been forced to cut rations due to skyrocketing food, fuel, and shipping costs, he explained. The rising costs have caused a $71 million per month increase in the agency’s operational costs, according to Beasley.

The Ukraine invasion is turning “the breadbasket of the world to breadlines” for millions of its people, while devastating countries like Egypt which normally gets 85 percent of its grain from Ukraine, and Lebanon which got 81 percent in 2020, Beasley said.

Beasley said the World Food Program buys 50 percent of its grain from Ukraine.

Wendy Sherman, the U.S. Deputy Secretary of State, told the Council that things will continue to deteriorate globally.

“So long as Putin continues his war, so long as Russian forces continue to bombard Ukrainian cities and block aid convoys, so long as besieged civilians are unable to get to safety, this humanitarian crisis will only get worse—in Ukraine, for the Russian people, and around the world,” said Sherman.

“If we end the conflict, address the needs, we can avoid famine, destabilization of nations, and mass migration,” he said. “But if we don’t, the world will pay a mighty price and the last thing we want to do as the World Food Program is taking food from hungry children to give to starving children.”

Sherman said Russia has bombed at least three civilian ships carrying goods from Black Sea ports to the rest of the world, including one chartered by an agribusiness company.

“The Russian navy is blocking access to Ukraine’s ports, essentially cutting off exports of grain,” she said.

Sherman said the United States is particularly concerned about countries like Lebanon, Pakistan, Libya, Tunisia, Yemen, and Morocco “which rely heavily on Ukrainian imports to feed their population.”

Developing nations in northern Africa and Asia are among the most reliant on Russia and Ukraine for their wheat supply.