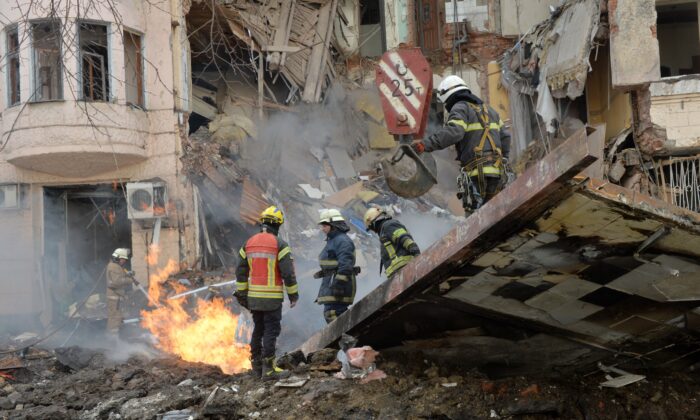 Firemen work to clear the rubble and extinguish a fire by a heavily damaged building after a Russian rocket exploded just outside it in Ukraine's second city Kharkiv on March 14, 2022. (Sergey Bobok/AFP via Getty Images)
Russia-Ukraine War

The Chinese regime sided with Russia in another U.N. vote on March 16, when the two nations dissented against a decision by the International Court of Justice (ICJ) ordering Moscow to “immediately suspend” its military operations in Ukraine.

Ukraine filed a suit against Russia at the ICJ, the highest legal body of the United Nations, on Feb. 26, arguing that Moscow had violated the 1948 Genocide Convention when it wrongfully justified its military actions as preventing genocide in Luhansk and Donetsk.

The court’s decision (pdf) ruled that Ukraine “has a plausible right not to be subjected to military operations by the Russian Federation for the purpose of preventing and punishing an alleged genocide in the territory of Ukraine.”

“The ‘special military operation’ being conducted by the Russian Federation has resulted in numerous civilian deaths and injuries. It has also caused significant material damage, including the destruction of buildings and infrastructure,” according to the court judgment.

In a 13-2 vote, the court ordered Russia to “immediately suspend the military operations that it commenced on 24 February 2022.” Russia’s Kirill Gevorgian and China’s Xue Hanqin voted against the decision.

The Russian and Chinese judges also voted against another decision: that Russia must ensure its military units “take no steps” to further its military operations in Ukraine. The 13 other judges voted in favor.

The latest vote marked the third time that China has supported or not opposed Russia in U.N. votes. On Feb. 25, China abstained from voting on a U.N. Security Council resolution demanding that Moscow stop its attack on Ukraine and withdraw its troops immediately.

On March 2, China again abstained from voting on a U.N. General Assembly resolution, denouncing Russia over its Ukraine invasion and calling on Moscow to immediately withdraw its forces. The resolution was adopted after 141 of the 193 member states voted in favor.

The Chinese Communist Party (CCP) has so far refused to call the Russian attack an invasion or condemn Moscow over its aggression. Weeks before the war, the two neighboring countries elevated their bilateral ties to a “no limits” partnership.

“Many persons have no access to the most basic foodstuffs, potable water, electricity, essential medicines or heating. A very large number of people are attempting to flee from the most affected cities under extremely insecure conditions,” she said.

Over 3 million Ukrainian refugees have fled to neighboring countries, according to data from the U.N.’s refugee agency.

The ICJ’s ruling has limited implications, since the court cannot enforce its rulings.

“The ICJ ordered to immediately stop the invasion. The order is binding under international law. Russia must comply immediately. Ignoring the order will isolate Russia even further,” Zelensky wrote on Twitter.

“We welcome the court’s order and call on the Russian Federation to comply with the order, immediately cease its military operations in Ukraine, and to establish unhindered humanitarian access in Ukraine,” Price said.

Earlier on Wednesday, Zelensky delivered an impassioned speech via video link to members of Congress, urging Washington to provide more military assistance to his country.

Rep. Mike Gallagher (R-Wis) said Zelensky’s speech was a “powerful reminder that America must lead in order to prevent further death, chaos, and destruction in Ukraine,” according to a statement from his office.

“We also need to send a clear message to the Chinese Communist Party that we will punish them if they intervene in the conflict in order to help Russia,” he stated. “The CCP must know we will make public any evidence of military assistance to Russia.”

In recent days, several media outlets, citing unnamed U.S. officials, have stated that Russia had requested military assistance and financial aid for its war from Russia, and Beijing had signaled a willingness to comply. The two nations have denied the allegations.

“The CCP and Russia have been waging a New Cold War against America and our allies for over a decade. It is time for us to wake up and start doing what is necessary to win,” Gallagher concluded.