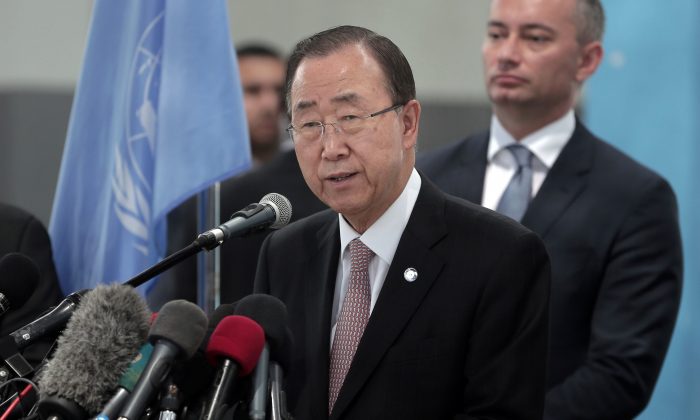 UN Secretary General Ban Ki-moon makes a statement to the press at a UNWRA school during his visit to the Gaza Strip, Tuesday, June 28, 2016. (AP Photo/Khalil Hamra)
International

GAZA CITY, Gaza Strip—The U.N. chief on Tuesday criticized Israel’s blockade of Gaza, a day after Israel and Turkey reached a broad reconciliation pact that looked to ease, but not eliminate, the isolation of the coastal strip.

In a visit to the region, which included a stop at a Gaza school, Ban Ki-moon bemoaned the plight of Gazans, saying that “the closure of Gaza suffocates its people, stifles its economy and impedes reconstruction efforts.”

“It’s a collective punishment for which there must be accountability,” the secretary-general added.

Meanwhile, in low-key affairs, Israel and Turkey formalized their agreement to restore full diplomatic relations after six years of animosity between the once-close allies.

In Ankara, Foreign Ministry Undersecretary Feridun Sinirlioglu signed the deal, paving the way for its approval in parliament. The largely procedural signing was closed to the media. In a similar, parallel ceremony, Israeli Foreign Ministry Director General Dore Gold signed the pact in Jerusalem.

The agreement with Israel will include an exchange of ambassadors and Israeli compensation for the deaths of 10 Turkish citizens from a 2010 Israeli naval raid on an activist flotilla that aimed to breach the Gaza blockade.

Turkey will also be allowed to bring relief supplies into Gaza and carry out new development projects here, but the deal did not fully lift the blockade that Israel has imposed on the Hamas-ruled territory to prevent the Palestinian militant group from importing weapons.

Gaza’s Hamas rulers thanked Turkish President Recep Tayyip Erdogan for his support in alleviating the strip’s hardship, saying it “expresses its thanks and appreciation” to Erdogan. However, Hamas stopped short of endorsing the pact and insisted it was sticking to its policy of resisting Israel. Despite the relief, Israel and Egypt still maintain their blockade of the isolated territory.

“From the moment you signed it, you are making this blockade legal,” Kilicdaroglu said, addressing the authorities. “You are accepting Israel’s control over Gaza.”

Relations between Israel and Turkey began to decline after Erdogan, whose party has Islamist roots, became prime minister in 2003. Relations took a sharp turn downward during Israel’s three-week war against Hamas in Gaza—from late December 2008 into January 2009—when Erdogan criticized Israel over the high Palestinian death toll.

Israel said the operation was needed to halt Hamas rocket fire and that the heavy civilian death toll resulted from Hamas using residential areas for cover.

Moscow Says Turkey Has Apologized for Downing of Russian Jet

The relations reached their nadir in 2010 when Israeli commandos stormed a Turkish ship aiming to breech the blockade of Gaza. Nine Turks, including a dual American citizen, were killed. One later died of his wounds. On the Israeli side, seven soldiers were wounded by activists who attacked them with clubs, knives and pipes.

Following the incident, Turkey withdrew its ambassador to Israel and scaled back military and economic ties. Relations were never broken completely. The reconciliation deal, long in the making, was officially announced on Monday.

In Israel, there has been broad criticism of the pact, particularly its agreement to pay compensation to the families of the Turkish casualties and the inability to secure the return of the remains of two dead soldiers and possibly two Israeli civilians whom Hamas is believed to be holding.

Three Israeli Cabinet ministers, including the new defense minister, Avigdor Lieberman, have said they will vote against the pact. But Prime Minister Benjamin Netanyahu should still have enough votes to pass the measure in his government.