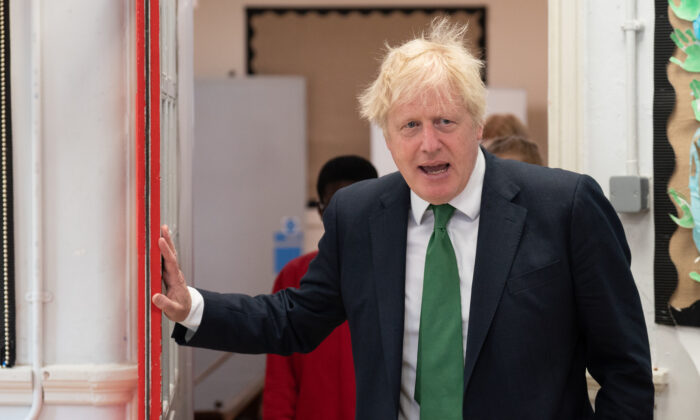 The National Union of Rail, Maritime, and Transport Workers (RMT) is holding a ballot of its 40,000 members on plans to strike over jobs, pay, and conditions. The ballot is set to close on Tuesday, and the union has claimed that a yes vote could lead to “the biggest rail strike in modern history.”

Another union, the Transport Salaried Staffs’ Association (TSSA), has also warned of a “summer of discontent” with similar action on the way unless pay disputes are resolved.

The prime minister’s official spokesman said on Monday: “Railways are going through difficult times with passenger numbers down. We need to make sure they’re fit for the future.”

He said the government wants “a fair deal for staff, for passengers, and taxpayers” so that “money isn’t taken away from other essential services” such as the National Health Service.

“The prime minister is firmly of the view that unions should talk to the government before causing irreparable damage to our railways—strikes should be the last resort not the first,” he added.

Transport Secretary Grant Shapps told The Sunday Telegraph that ministers are looking at drawing up laws which would make industrial action illegal unless a certain number of staff are working.

Shapps said the government hopes the unions will “wake up and smell the coffee” and suggested that strikes could put more people off rail travel.

He also accused unions of going straight to industrial action rather than using it as a last resort, adding that railways were already on “financial life support” because of the CCP (Chinese Communist Party) virus pandemic.

Unions have reacted to the threat with anger.

RMT General Secretary Mick Lynch said, “Any attempt by Grant Shapps to make effective strike action illegal on the railways will be met with the fiercest resistance from RMT and the wider trade union movement.”

He said the government needs to “focus all their efforts on finding a just settlement” to the rail dispute rather than “attack the democratic rights of working people.”