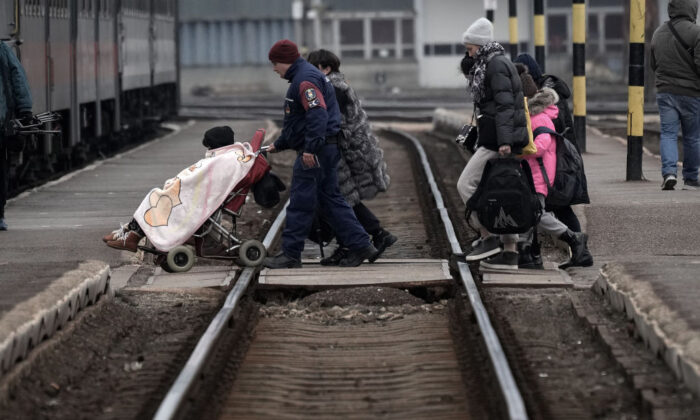 Ukrainian Refugees and the Multiculturalism of Displacement

As war intensifies in Ukraine, the toll of human misery and suffering is rising. Civilians hurrying to flee the fighting are once again crossing European land borders, taking with them any possessions they can carry, in search of a respite from conflict.

The tragic impact of this is already being felt in many countries—including in Australia, even though we are separated by many thousands of kilometres from the war.

According to estimates by the United Nations, nearly 700,000 people have fled to neighbouring countries with almost another million people displaced within Ukraine itself.

Displacement of populations tears up family and neighbourhood ties. Relocation compelled by war can mean that new roots have to be set down; often in alien communities with very different legacies of culture, language, and history.

As borders change, so also do the communities living within those borders. When conflict comes to an end, people can end up living, unexpectedly, as citizens of one state whilst striving to retain a sense of another national identity.

Situations such as that generated by war in Ukraine—where people who claim one nationality can eventually find themselves living alongside those who claim another—give rise to very particular challenges for multiculturalism.

“Multiculturalism” is a term used in a wide range of ways and sometimes is taken to mean no more than the fact of a population’s cultural and ethnic diversity.

For example, this is one of the ways in which “multiculturalism” is used commonly in Australia. By contrast, we can think of the challenges posed by forced relocation of populations as characteristic of the “multiculturalism of displacement.”

Of course, many people do come to Australia as fugitives from war and persecution. Yet multiculturalism in Australia essentially describes the situation whereby people who arrive here may retain a sense of another national identity but accept the priority of their new national identity as Australians; and, when granted permission to remain, also accept their newly conferred status as citizens of the Australian state.

For example, one provision of the 1920 Treaty of Trianon, which formally ended the Allied Powers’ war with Hungary, altered the borders of that country by transferring the region of Transylvania to Romania.

For Hungarians who continue to live in Transylvania a century later, a sense of Hungarian nationality is far more significant for their identity than their legal status as citizens of the state of Romania.

Cultural tensions persist over the use of the Hungarian language, the teaching of Hungarian history in schools, and even with the coexistence of different forms of Catholic Christianity.

As the world watches the unfolding horror in Ukraine, it is far from clear what the outcome of Russia’s invasion of that independent sovereign nation will be. Some refugees who have fled the war may return to what remains of their old home; others will end up relocating permanently to new countries—including, possibly, Australia—to build lives in unfamiliar communities.

Their experience of multiculturalism as they rebuild their lives will greatly depend on where, and in which communities, they settle.

But in whatever way borders are redrawn once fighting ceases, it is unthinkable that either Ukrainians or Russians living in whatever becomes of that region will ever lose their strong sense of national identity.

Indeed, retaining a strong sense of a national and cultural heritage is an essential component of living successfully with the multiculturalism of displacement.

This heritage is often transmitted through the very localised institutions of family, school, and community association, such as a church congregation. But it also depends upon the capacity of members of the displaced community to live successfully with a high degree of ambiguity.

Living with ambiguity in the context of displacement means, in turn, acquiring the civic skills to accept the legal and social constraints—such as may be placed upon freedom of religion or freedom to use a language—that may be entailed by living as citizens of another state. But it also means understanding that one consequence is learning to live with unresolved cultural, social, and political differences.

In situations of displacement, where national identity and identity as a citizen do not readily coincide, the experience of ambiguity will, at times, be acute and the need to acquire skills to live with it will be all the more urgent.

The trauma of war will only add to the burdens refugees fleeing Ukraine will have to bear.