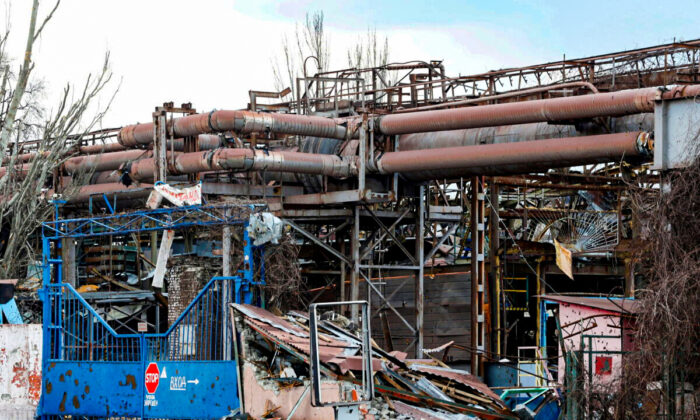 A view shows the gates of the Illich Steel and Iron Works damaged during Ukraine-Russia conflict in the southern port city of Mariupol, Ukraine, on April 15, 2022. (Alexander Ermochenko/Reuters)
Russia-Ukraine War

A Ukrainian official said that Mariupol city “doesn’t exist anymore” after Russia announced the urban area of the city is clear of Ukraine troops.

“The situation in Mariupol is both dire militarily and heartbreaking. The city doesn’t exist anymore. The remainder of the Ukrainian army and large group of civilians are basically encircled by the Russian forces,” Ukrainian Foreign Minister Dmytro Kuleba said during an interview with CBS’ “Face the Nation.”

The Kremlin announced on Saturday that there were no Ukrainian troops in the urban area of Mariupol, a key battlefield in the east of Ukraine.

“The entire urban territory of Mariupol is completely cleared of militants of the Nazist group ‘Azov,’ foreign mercenaries, and Ukrainian troops,” the Russian Defense Ministry wrote in a social media post.

About 2,500 Ukrainian troops are blocked from leaving Azovstal, one of Europe’s biggest metallurgical plants located in the east of Mariupol, by Russian troops who have surrounded the plant, the Russian Defense Ministry estimated.

Several Ukrainian officials said their troops are still struggling in Mariupol and have defied the deadline offered by Russian forces to surrender.

The Russian Defense Ministry gave the Ukrainians at Mariupol’s giant Azovstal steel mill until 1 p.m. on April 17 to surrender, saying that those who put down their weapons will be “guaranteed to keep their lives.”

Ukrainian troops refusing to surrender in the besieged port of Mariupol would be destroyed, the Russian military warned.

Ukrainian President Volodymyr Zelenskyy threatened to cut all talks with Russia if the remaining Ukrainian troops in Mariupol were eliminated.

“The more Borodianka-like cases appear, there will be no chance that negotiations will be held, actually,” he said during an interview with Ukrainian media. “The destruction of all our guys in Mariupol—what they are doing now—can put an end to any format of negotiations.”

Borodianka is an urban-style settlement about 37 miles northwest of the Ukrainian capital of Kyiv from which the Russian forces recently withdrew. Zelenskyy said that more than 300 civilians were killed by Russian forces, with about 30 of them executed.

However, Kuleba said that Russia and Ukraine have had no contact for weeks at the diplomatic level.

“The only level of contact is the negotiating team that consists of representatives of various institutions and members of parliament,” he said.

He downplayed the ceasefire talks and labeled the efforts as “consultations at the expert level.”

Russian President Vladimir Putin ordered a full-scale invasion of Ukraine on Feb. 24, which the Kremlin calls “a special military operation.”

The United Nations said that as of April 15, 1,982 civilians had been killed and 2,651 injured in Ukraine since Russia’s invasion, and more than 4.8 million people had fled the country.

Russian forces recently shifted focus to the south and east of Ukraine where the separatist or disputed territories are located. The Kremlin is apparently intending to occupy the corridor connecting Crimea and Donbas, with Mariupol being a key city along the corridor.

However, a ceasefire over this area seems stuck, with the two sides having taken on irreconcilable stances.

The gap between Russian and Ukrainian demands seems unbridgeable on the issue of Crimea and Donbas; both areas have been de facto occupied by Russia or pro-Russian separatists.

Putin clearly demanded that Ukraine recognize Crimea as part of Russia, and Donetsk and Luhansk as independent. Meanwhile, Zelenskyy has agreed to possibly set aside the disputes for those territories but also vowed to not give them up.