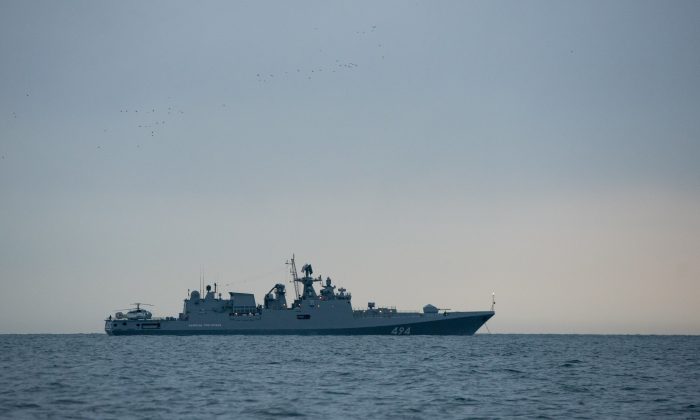 A Russian landing ship was destroyed and two other ships were damaged in the Ukrainian port city of Berdyansk, according to Ukrainian officials.

The Ukrainian military posted a video on March 24 that claimed its forces destroyed the Orsk.

“The Orsk large landing ship of the Black Sea Fleet of the occupiers has been destroyed in the port of Berdyansk captured by Russia,” the Ukrainian navy said on Facebook.

“The occupiers are burning well,” wrote the Ukrainian armed forces on Twitter, alongside another video that shows dark smoke billowing from what was said to be the destroyed landing ship.

“Yes, it’s destroyed,” Ukraine’s Deputy Defense Minister Hanna Malyar said in a video briefing, according to Reuters. The ship was capable of carrying 45 armored personnel carriers and 400 troops, she said.

Russia’s armed forces confirmed earlier this week that the ship had docked in Berdyansk, a Black Sea port city, to deploy military equipment, according to the state-run TASS news agency.

The Orsk’s arrival in Berdyansk was hailed by Moscow as an “epic event that opens up opportunities for the Black Sea in terms of logistics by using the port of Berdyansk infrastructure to the full extent,” TASS reported, citing Russia’s Defense Ministry-linked television channel Zvezda.

Western leaders meeting in Brussels on March 24 agreed to strengthen their forces in Eastern Europe and increase military aid to Ukraine as the Russian assault on its neighbor entered its second month.

In Brussels, President Joseph Biden met with NATO Secretary-General Jens Stoltenberg ahead of the meeting, according to a readout provided by the White House.

The two discussed “the unity and strength of the alliance and NATO’s ongoing efforts to deter and defend against any aggression, and they welcomed the support of Allies for the government and people of Ukraine.”

Ukrainian President Volodymyr Zelenskyy urged the leaders to go further and repeated his call for a no-fly zone over his country, where thousands of people have been killed, millions have become refugees, and cities have been pulverized since Russia invaded on Feb. 24.

Zelenskyy reiterated that he’s was ready to have a face-to-face meeting with Russian President Vladimir Putin to end the war.

“We are ready to discuss the terms of the ceasefire, the terms of peace, but we are not ready for ultimatums,” he said.

Meanwhile, Ukraine’s armed forces chief of staff said on March 24 that Russia is still trying to resume offensive operations to capture the cities of Kyiv, Chernihiv, Sumy, Kharkiv, and Mariupol.