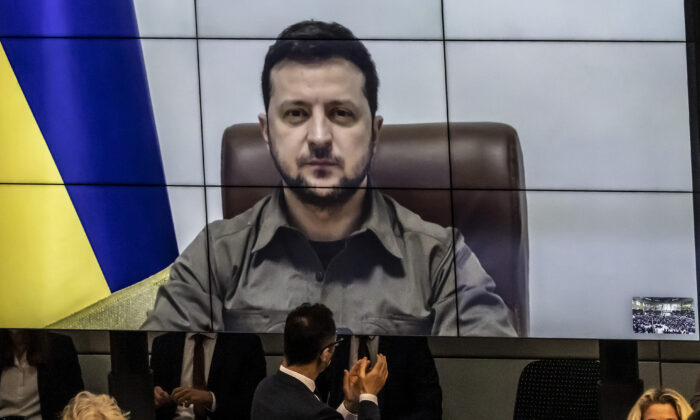 Ukraine is unlikely to resort to military means to take back Donbass and Crimea in the short term, Ukrainian President Volodymyr Zelenskyy said on Tuesday.

“Russia has its own vision of Donbass, and Ukraine has its own. So I had a simple suggestion. I believe that we will not be able to agree on all points at once. This is impossible, even if we have negotiations,” he said during an interview with Ukrainian media.

Ukrainian armed forces could lose thousands of soldiers if they’re ordered to take back Donbass and Crimea, which he called “temporarily occupied territories.”

It will also endanger the general security of his country as the group who is fighting in Donbass are the elite segment of the Ukrainian militaries.

“Our state needs a strong army. And if we want to lose the most powerful, most experienced people because ‘I want it now,’ we must understand that [Russian armed forces] will return to us, and not in two or three years, but in the same month. All the military know and think about it,” he elaborated. “This is a very serious story.”

Taking back control of the city of Mariupol, which was taken by Russia after the invasion started on Feb. 24, is also very difficult, he said.

Zelenskyy made the remarks as the Russian armed forces withdrew from the outskirts of Kyiv after trying to occupy the Ukrainian capital in month-long battles and shifting to the disputed territories in eastern Ukraine.

Russia annexed Crimea in 2014, and the conflicts in Donbass between the Ukrainian military and Russia-backed separatists escalated into a war the same year.

Both areas have been de facto occupied by Russia or separatists.

The Kremlin said earlier that the Donbass is the main goal of the full-scale invasion ordered by Russian President Vladimir Putin.

Zelenskyy acknowledged that the intention of Russia’s military operation is to occupy the corridor connecting Crimea and Donbass, with Mariupol being a key city along the corridor.

“Donbass, and the south of Ukraine, and the corridor to Crimea, and the Kherson region, and the Zaporizhzhia region,” he said. “We basically understand what they are doing.”

Putin ordered a full-scale invasion of Ukraine on Feb. 24, which the Kremlin called “a special military operation.”

The United Nations said that as of April 4, 1,430 civilians have been killed and 2,097 injured in Ukraine since Russia’s invasion and over 4.2 million people have fled Ukraine.

Zelenskyy’s statement reaffirmed one of the two major concessions from the former Soviet country after the war started.

Ukrainian negotiators proposed a security guarantee mechanism including multiple nations at the end of March in the draft ceasefire deal. Crimea and Donbass are excluded from the proposal.

In another major concession, Ukraine renounced the pursuit of the North Atlantic Treaty Organization membership.