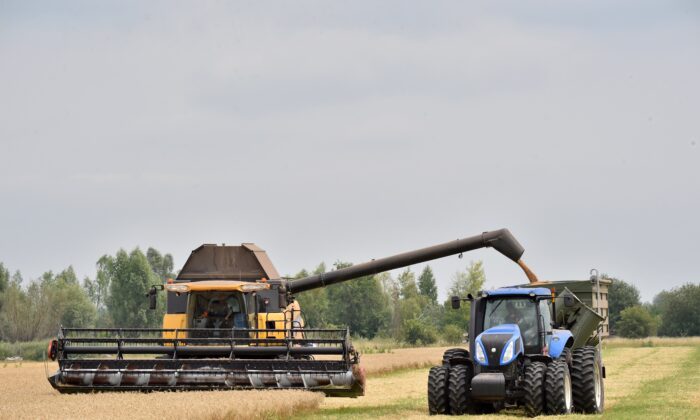 Grain is poured from a combine harvester into a tractor in the village of Mala Divytsa, Ukraine on July 27, 2015. (Sergei Supinsky/AFP via Getty Images)
Russia-Ukraine War

Russia and Ukraine signed a deal on Friday to allow the export of millions of tons of grain amid the war between the two countries, said U.N. Secretary-General Antonio Guterres.

The deal was signed in Istanbul, Turkey, to allow Ukrainian grain exports through the Black Sea. It comes after months of negotiations between the two sides, which were mediated by the United Nations and Turkey.

“Today, there is a beacon on the Black Sea. A beacon of hope, a beacon of possibility, a beacon of relief in a world that needs it more than ever,” Guterres said Friday in Istanbul.

Guterres said the accord opens the way to significant volumes of commercial food exports from three key Ukrainian ports—Odesa, Chernomorsk, and Yuzhny, and the U.N. would set up a coordination center to monitor the implementation of the deal.

“Promoting the welfare of humanity has been the driving force of these talks,” he said. “The question has not been what is good for one side or the other. The focus has been on what matters most for the people of our world. And let there be no doubt—this is an agreement for the world.”

Russia and Ukraine, both among the world’s top exporters of food, sent their defense and infrastructure ministers respectively to Istanbul for the signing ceremony, also attended by Turkish President Tayyip Erdogan.

A blockade of Ukrainian ports by Russia’s Black Sea fleet trapped tens of millions of tonnes of grain in silos and stranded many ships. Some Western officials say it’s worsened global supply chain bottlenecks and, along with sweeping Western sanctions, stoked galloping inflation in food and energy prices around the world.

Moscow has denied that it has caused a food crisis and said Western sanctions are the reason why. Russia also accused Ukrainian forces of placing mines along the approaches of its Black Sea ports.

Ukraine and Russia have made few agreements since the invasion of Ukraine started on Feb. 24. Previous rounds of peace talks held in neighboring Belarus yielded no accords, while negotiations in Turkey in March were fruitless.

Before the deal was done Friday, a Kyiv official said it would not directly negotiate with Moscow.

“Ukraine does not sign any documents with Russia. We will sign an agreement with Turkey and the UN,” presidential aide Mykhaylo Podolyak said via Twitter. Russia would sign a separate agreement with the two, he added.

Nonetheless, Guterres said Friday that the agreement on grain is “an unprecedented agreement between two parties engaged in bloody conflict. But that conflict continues. People are dying every day. Fighting is raging every day.”

A separate pact signed on Friday would smooth Russian food and fertilizer exports that were welcomed by the U.N. To address Russian concerns about ships smuggling weapons to Ukraine, all returning ships will be inspected at a Turkish port by representatives of all parties.