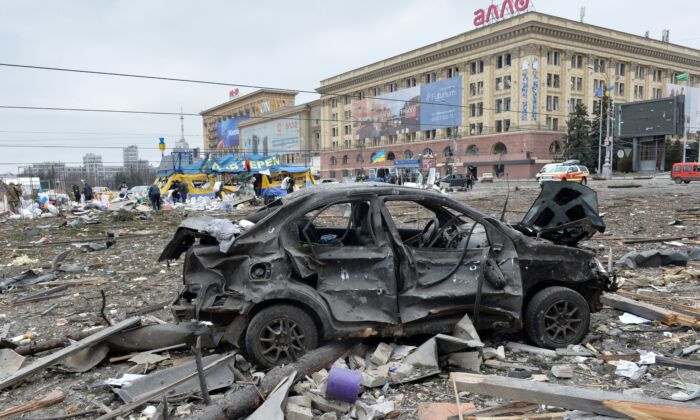 The square outside the damaged local city hall of Kharkiv on March 1, 2022. (Sergey Bobok/AFP via Getty Images)
Russia-Ukraine War

Ukraine’s Security Service (SBU) has launched a service on Telegram to collect evidence of potential war crimes committed by the Russian Federation, as the International Criminal Court prepares to investigate Russia’s invasion of Ukraine.

“Russia will definitely answer for the attack on Ukraine! For every day brings new evidence for the Hague Tribunal. Our task is not only to protect our country, but also to record information about the crimes of the Russian army. So that no one escapes responsibility! To collect data, the Security Service of Ukraine launched the new service – the official bot @russian_war_tribunal_bot,” the SBU said in a message on the federal agency’s Telegram channel.

The Security Service of Ukraine called on people to report any potential war crimes committed by the Russian army.

It comes as Karim Khan, a British lawyer and the chief prosecutor of the International Criminal Court (ICC), said he would launch an investigation into possible war crimes in Ukraine, in response to Russian President Vladimir Putin’s invasion of Ukraine that began on Feb. 24.

Images of cluster bombs and artillery strikes on Ukrainian cities prompted Khan to launch an investigation, with the support of dozens of nations opposed to Russia’s invasion.

“Today, the International Criminal Court in Hague has begun investigating the case of the war of the Russian Federation against Ukraine. So, the invaders must answer for everything they do on our land! War crimes have no statute of limitations!” the SBU said.

The General Staff of the Armed Forces in Ukraine said Tuesday that the bot would enable people to record and submit potential evidence.

Khan has said “allegations of war crimes, crimes against humanity or genocide committed on any part of the territory of Ukraine by any person” will be probed.

The SBU also noted that the official chatbot for reporting the movement of Russian troops and sabotage groups is operating at full capacity, and has helped the Ukrainian Armed Forces neutralize a lot of Russian tanks.

Khan told Reuters that his office would see if there was evidence of war crimes, crimes against humanity and acts of genocide—the offences under the court’s jurisdiction—by all parties in the conflict.

Asked about reports of artillery strikes in Ukraine’s towns and cities, Khan said: “Any side that targets, directly targets, civilians or civilian objects is committing a crime under the Rome Statute and under international humanitarian law,” referring to the statue that created the court.

Hundreds of Russian soldiers and Ukrainian civilians have been killed since Putin launched an invasion.