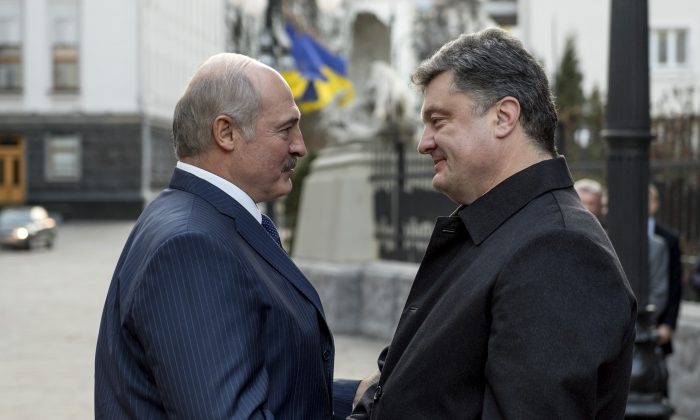 KIEV, Ukraine—Ukraine’s president signed a bill Monday dropping his nation’s nonaligned status but signaled that he will hold a referendum before seeking NATO membership.

But he also said he will leave it up to Ukrainian citizens to decide in a popular vote whether to join NATO or not.

“When we are able to conform to these criteria, the people of Ukraine will make up their mind about the membership,” Poroshenko said, adding that this will likely happen in the next five to six years.

While public support for joining the alliance has swelled after Russia’s annexation of Ukraine’s Crimean Peninsula in March and a pro-Russia insurgency in eastern Ukraine, prospects for NATO membership in the near term appear dim.

With its long-underfunded military suffering from the war with the separatists and the country’s economy in peril, Ukraine has much to overcome to achieve the stability that the alliance seeks in its members.

Poroshenko said he is planning to meet with leaders of Russia, Germany and France in Kazakhstan’s capital, Astana, on Jan. 15 to discuss a peace settlement for eastern Ukraine. The four leaders previously met in France in June.

Ukraine and the West have accused Russia of fueling the rebellion in eastern Ukraine with troops and weapons, which Moscow has denied. Fighting in the east has claimed more than 4,700 people since April.

Representatives of Ukraine and the rebels agreed on a cease-fire in September, but it has been frequently violated as the parties have failed to reach a deal on a line of division to create a buffer zone.

Poroshenko said he still believes there is “no military solution” to the conflict in the east, adding that he will press Russia to withdraw its soldiers from Ukraine and seal the border.

From The Associated Press. Nataliya Vasilyeva contributed to this report from Moscow.