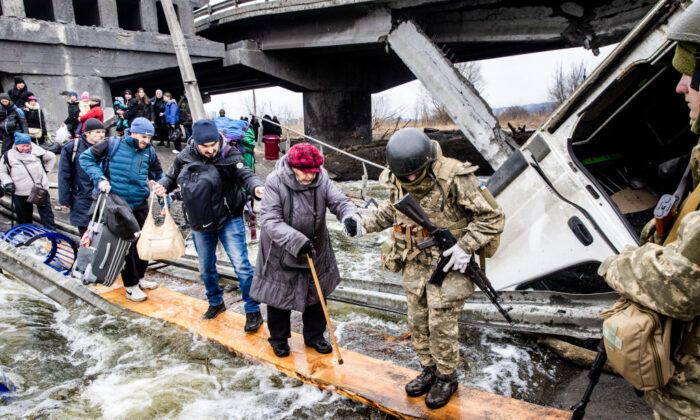 “I want this to be heard not only in Kyiv but all over the world,” Reznikov said, without providing further details.

Thousands of people are believed to have been killed across Ukraine since Russian forces invaded two weeks ago. The United Nations human rights office said Thursday it had recorded the killings of 549 civilians in Ukraine since the invasion began, including 26 children.

Most of the casualties have been caused by “the use of explosive weapons with a wide impact area,” it said. It believes the real toll is “considerably higher,” however, noting that the numbers don’t include some areas of “intense hostilities,” including Mariupol.

Ukrainian Foreign Minister Dmytro Kuleba met with his Russian counterpart Sergei Lavrov in Turkey on Thursday in a bid to secure a ceasefire so that civilians could be evacuated via humanitarian corridors but this—like prior peace efforts—ended with no progress.

In an extraordinary claim following their meeting, Lavrov claimed that Russia “did not attack” Ukraine while dismissing concerns about Russian shelling of a Ukrainian children’s hospital in Mariupol as a “pathetic outcry.” Lavrov claimed the hospital had earlier been seized by Ukrainian far-right radical fighters who were using it as a base.

On his way back to Ukraine, Kuleba visited Poland, where he was received by Polish President Andrzej Duda. Their discussions focused on Ukraine’s efforts to join the European Union and on practical steps to protect the people of Ukraine amid the Russian onslaught.

Duda said he was told by his Ukrainian counterpart, President Volodymyr Zelensky, that Russian troops were still not ready to storm Kiyv and were instead bombing residential buildings and hospitals to try to “break” the will of the Ukrainian defenders.

“Tomorrow another attempt will be made to evacuate civilians from Mariupol. RU are shelling non stop. God save UA!” the Polish president said in a tweet.

The Red Cross on Wednesday estimated more than 400,000 people were trapped in Mariupol without humanitarian aid and evacuation corridors, with a spokesperson describing the conditions in the city as “apocalyptic.”

Ukrainian authorities say they’ve been trying to evacuate their citizens from the besieged city, but that this requires cooperation from the Russian side, which they say has been lacking. They accuse Russian forces of shelling civilian areas to terrorize civilians and pressure Kiyv into capitulation.

Poland has been a staunch ally to Ukraine during the war, taking in around 1.5 million refugees, more than any other country, according to the latest U.N. data.

A somber milestone was hit on Friday, with the total number of people fleeing the war in Ukraine hitting 2.5 million, according to Filippo Grandi, U.N. High Commissioner for Refugees.

“We also estimate that about two million people are displaced inside Ukraine. Millions forced to leave their homes by this senseless war,” Grandi said in a tweet.

Top officials from NATO and the U.N. have called the war in Ukraine the fastest growing refugee crisis since World War Two.

Former President Donald Trump said Thursday that Russia’s invasion of Ukraine is “truly is a crime against humanity.”

“This is something that has to end, and it has to end soon,” Trump told Fox News in an interview.

Roman Brovko, a Ukrainian filmmaker living in Kyiv, told The Epoch Times in a phone interview that he’s witnessed the destruction of civilian infrastructure first-hand by Russian shelling.

He said that, even if Russia prevails in its military campaign, he believes Moscow’s efforts to control the country will be met with staunch resistance via insurgency.

“Ukrainians are ready to give up their lives for freedom. A partisan resistance movement is already starting to take shape,” he said.

“We don’t want to live under a dictatorship,” Brovko added.