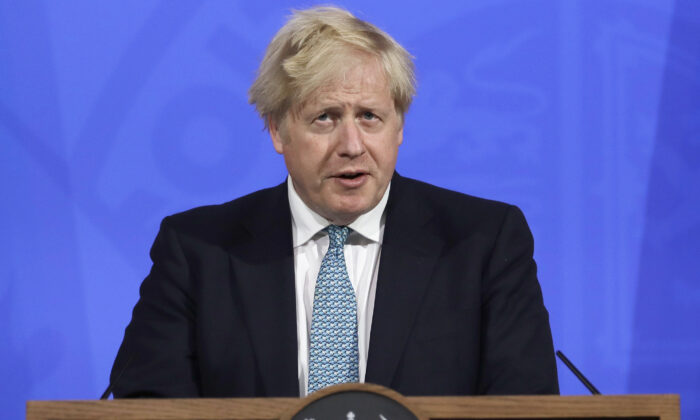 The British government will not let anti-Semitism take root, grow, and fester in the UK, Prime Minister Boris Johnson said on Wednesday.

UK politicians across the political spectrum have condemned recent incidents of anti-Semitic abuse and violence.

At the Prime Minister’s Questions in the House of Commons on Wednesday, Labour leader Sir Keir Starmer called attention to the “appalling rise in anti-Semitic attacks” and said, “Jewish communities remain very anxious.”

Johnson said he shared Starmer’s “horror” at recent incidents, adding that the government had “conveyed that message loud and clear to those who are responsible for enforcing the law against hate crime of that kind.”

He said Britain will call out anti-Semitic behaviour at every stage. “We will not let it take root, we will not allow it to grow and fester.”

Johnson said the government will “continue to work and to support the Jewish community in any way that we can—particularly working with the Community Safety Trust who do an absolutely outstanding job in my view.”

The Community Safety Trust (CST), which gathers reports of anti-Semitic incidents, said there were 116 recorded in the 11-day period from May 8, compared to 19 in the 11 days before May 8, an increase of around six times.

Of the 116 reports, 34 were online abuse, 82 were offline, and mainly verbal abuse, although four were violent.

According to prosecutors, the two defendants walked into the road causing Rabbi Rafi Goodwin, who was driving, to brake.

One said “he’s a Jew,” before the complainant’s car was kicked multiple times, causing the passenger side wing mirror to snap off.

Goodwin got out of his vehicle and was punched multiple times in the face until he fell to the floor then struck on the back of the head with a concrete brick. His phone was stolen, the prosecution said.