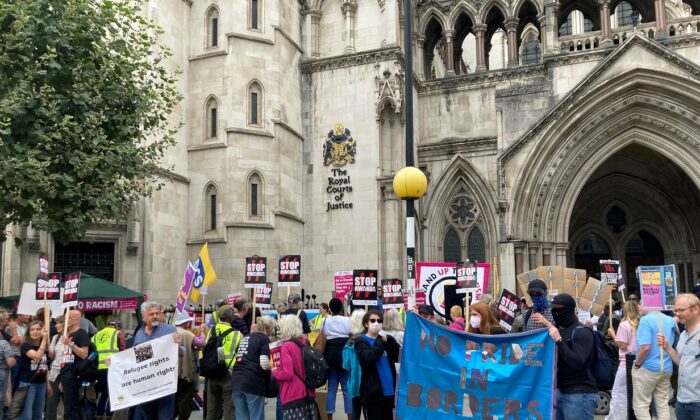 Demonstrators, protesting against the government's plan to send some illegal immigrants to Rwanda, outside the Royal Courts of Justice, central London, on Sept. 5, 2022. (PA)
UK

An appeal at the High Court in London against the British government’s plan to send illegal immigrants to Rwanda has been told the African country “tortures and murders those it considers to be its opponents.”

In April the Prime Minister Boris Johnson—who will be replaced on Tuesday by Foreign Secretary Liz Truss—announced plans to send people who cross the English Channel in small boats and enter Britain illegally to Rwanda while their asylum claims are processed.

Under the plan, those who were refused permission to stay in Britain would be left in Rwanda.

The first flight taking the illegal immigrants to Rwanda was grounded in June after a last-minute intervention by the European Court of Human Rights.

The Home Secretary, Priti Patel, had agreed a deal with the Rwandan government earlier this year but was forced to put the project on hold after a legal challenge by campaign groups Care4Calais and Detention Action, and the Public and Commercial Services union, as well as a number of individual asylum seekers, which began on Monday.

Raza Husain QC, a barrister representing those challenging Patel, told the court, “Rwanda is in substance a one-party authoritarian state with extreme levels of surveillance that does not tolerate political opposition.”

Husain said: “A safe third country that complies with the refugee convention … may achieve that compliance in a number of ways.”

He added: “A presumption of safety must be sufficiently supported at the outset.”

In written arguments Husain said neither the policy’s “claimed economic benefit” or “its asserted efficacy as a deterrent” had any grounding in evidence.

Husain said the U.N.’s High Commissioner for Refugees has raised a number of concerns about Rwanda’s record with refugees, including a failure to provide reasons for refusal.

The home secretary’s legal team, led by Lord Pannick QC and Sir James Eadie QC, argued there was no risk of those who are not granted refugee status in Rwanda being sent back to their home country, adding, “Rwanda does not conduct forcible removals to the countries of which these claimants are nationals.”

The majority of illegal immigrants crossing the English Channel are Albanian, Afghan, Iranian, or Eritrean.

The Home Office insists the Rwanda policy is “not unlawful” and the memorandum of understanding agreed with the government in Kigali provides assurances about a “safe and effective” refugee status determination procedure.

Outside the court there were clashes, reported on social media, between rival groups supporting and opposing the deportations to Rwanda.

The hearing is due to last for five days and another campaign group, Asylum Aid, has brought a separate legal challenge next month.

Rwanda has been ruled since 1994 by President Paul Kagame, an ethnic Tutsi, whose RPF rebel group took power in the wake of the genocide of almost a million Tutsis by extremists from the majority Hutu tribe.

Kagame has been accused of not brooking dissent and of authorising the assassination of political rivals in Rwanda and abroad. Last year Paul Rusesabagina, a businessman whose role in saving hundreds of lives during the genocide inspired the film “Hotel Rwanda,” was jailed for 25 years on terrorism charges after being allegedly kidnapped in Dubai.