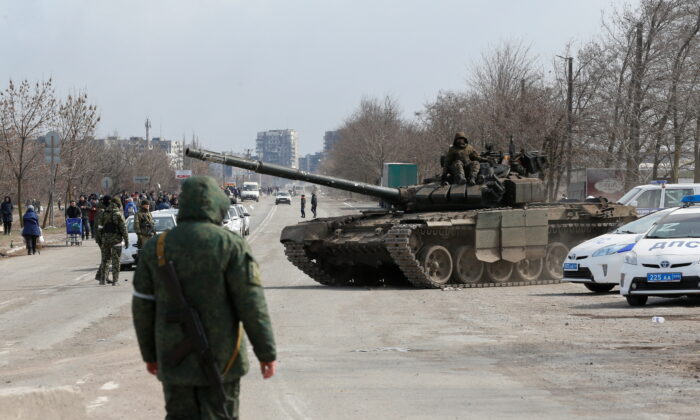 Service members of pro-Russian troops are seen atop of a tank during Ukraine-Russia conflict on the outskirts of the besieged southern port city of Mariupol, Ukraine, on March 20, 2022. (Alexander Ermochenko/Reuters)
Russia-Ukraine War

The British government has condemned Russia’s alleged “abduction and deportation” of Ukrainian residents from the besieged city of Mariupol.

Foreign Secretary Liz Truss wrote on Twitter: “I am appalled by Russian atrocities in Mariupol, including attacks on schools sheltering civilians and the abduction and deportation of Ukrainians.

“Putin is resorting to desperate measures as he is not achieving his objectives. Putin and his regime will be held to account.”

Ukrainian officials in Mariupol have claimed in recent days that Russian forces have been forcibly deporting several thousand residents from the Ukrainian city to Russia. The Epoch Times could not independently verify the claims.

Speaking to Times Radio, Ukrainian MP Inna Sovsun said citizens were effectively being “relocated” by the Russia, which she said was following “the logic of Nazi Germany.”

She said: “They are sending them through what are called the ‘filtration camps’ and then they are being relocated to very distant parts of Russia, where they are being forced to sign papers [saying] that they will stay in that area for two or three years and they will work for free in those areas.”

Mariupol, a strategically important target for Russia, has seen heavy Russian shelling in recent weeks amid the Moscow-led invasion of Ukraine that began on Feb. 24.

Located on the Sea of Azov, the city could serve as a land corridor between the eastern regions of Donetsk and Luhansk that are controlled by Moscow-backed separatists, and Crimea, which Moscow annexed in 2014.

Russian troops have encircled the city over the past few weeks, leaving many of its 400,000 residents trapped inside with little if any food, water, and power.

A steady barrage of Russian shelling has also hindered previous evacuation efforts. Last week, a theatre in the city sheltering thousands of people was hit by a powerful Russian air strike.

Citing Ukrainian Parliament member Serhiy Taruta, the Ukrainian Ministry of Culture and Information said in a Twitter post on Thursday that the bomb shelter underneath the Mariupol Drama Theatre had survived the shelling and “people are coming out alive as the rubble is being cleared.”

However, on Sunday, authorities in Mariupol said that an art school sheltering around 400 people had also been attacked by Russia’s military. Officials did not state how many casualties have been reported.

Johnson said the UK was “committed to stepping up military, economic, and diplomatic support” in a bid to bring about an end to the war.

He asked Zelensky what the Ukrainian military required in their resistance against Russian aggression, and vowed to advance Kyiv’s interests at NATO and G-7 meetings planned for this week.

Russia on Sunday urged Ukrainian forces to lay down arms in the besieged port city. But the Ukrainian government has rejected Russia’s demand.

“There can be no question of any surrender, laying down of arms,” the Ukrainska Pravda news portal cited Ukraine’s Deputy Prime Minister Iryna Vereshchuk as saying.

Katabella Roberts and PA Media contributed to this report.