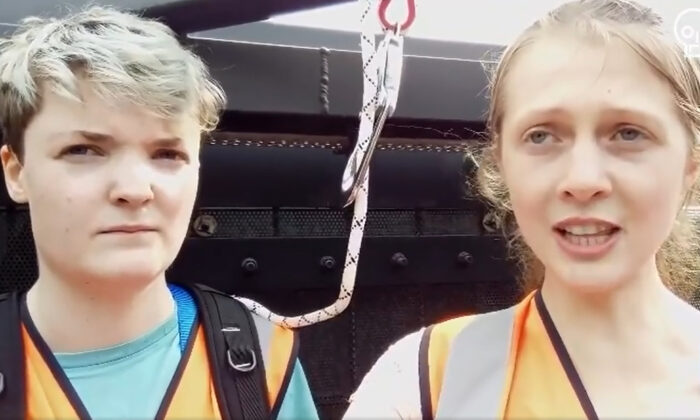 Handout screen grab taken from a video issued by Just Stop Oil of a group of their activists who have climbed motorway signs on the M25 in response to the extreme temperatures in the UK and what they describe as the government's "inadequate preparations" for climate change, on July 20, 2022. (Just Stop Oil/Screenshot by PA Media)
UK

The activist group Just Stop Oil blocked one of the busiest and most congested parts of the British motorway network by climbing on motorway signs, criticising what they call the government’s “inadequate preparations” for climate change.

The group declared the motorway a site of “civil resistance” and urged no one to travel on the motorway until the weekend.

On Wednesday, five activists scaled gantries that support overhead motorway signs in three places on the M25, causing police to close sections of the road.

In a statement released shortly before the demonstrations, Just Stop Oil said it was “declaring the M25 a site of civil resistance” this week.

The group also asked that “no one travels on this motorway from Wednesday to Friday this week as we will be blocking the highway.”

The statement added: “We fully acknowledge the cost and disruption this will cause to the public and ask that they take their demands for compensation to the government which has caused this unprecedented threat to our lives and liberties.”

Protesters climbed signs at junction 10 eastbound near Cobham, Surrey, the Poyle interchange at Heathrow between junctions 14 and 15, and in Dartford between the Queen Elizabeth Bridge northbound and junction 30.

The road was shut for hours in both directions causing long tailbacks. The protest was stopped after specialist police officers trained to work at height went into the gantry to bring them down.

The Daily Mail reported that they caused up to seven hours of traffic chaos.

Two men and a woman were arrested on suspicion of causing a public nuisance and taken into custody, said authorities on Twitter.

Bus driver Ashley Reid, who takes special needs children aged seven to 10 to a school in Leatherhead, was travelling between junction 12 and 10 and said his pupils, who start at 9:15 a.m., were around 90 minutes late for their last day of term as a result of the disruption.

“We joined (the motorway) just after 9 a.m. and we didn’t arrive at school until 10:45 a.m. with their autism (they) found it difficult to understand and stay calm,” the 40-year-old, from Reigate, told the PA news agency.

“It was really disruptive and I felt so sorry for them. Today was their last day before the summer break and they would all be changing classes so they just wanted to get to school and spend time with their teachers and friends,” said Reid.

Just Stop Oil is linked to the larger Extinction Rebellion group. In May, UK police arrested and charged 31 climate activists from the group after they blockaded an oil terminal in Scotland for around 60 hours.

The British government’s strategy called “Net Zero Strategy: Build Back Greener” has set out policies and proposals for decarbonising all sectors of the UK economy to meet the UK’s net zero target by 2050.