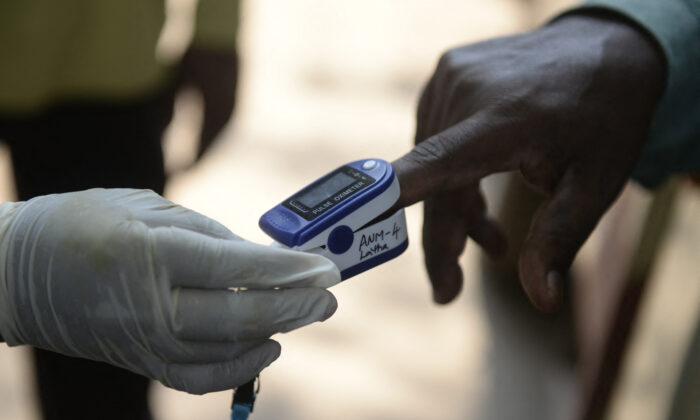 A health worker uses an oximeter to monitor the oxygen saturation levels of a resident during a door-to-door survey to check for COVID-19 symptoms at a low income neighbourhood in Hyderabad, India, on May 6, 2021. (Noah Seelam/AFP via Getty Images)
UK

The UK on Sunday called on the United States and other “like-minded countries” to tackle alleged biases in medical devices, such as oximeters that give less accurate readings on darker skins, which may have contributed to the higher COVID-19 mortality rate in ethnic minorities.

The Secretary of State for Health and Social Care Sajid Javid said he had commissioned an independent review to find out if “systematic bias” exists within medical devices in the UK.

Javid also said he had spoken to his U.S. counterpart Xavier Becerra about the issue, and wanted to work with the United States and other like-minded nations to “shape what sits behind these valuable technologies.”

Writing in The Sunday Times, Javid said “oximeters, which … are used to see whether treatment is needed for COVID-19, are less accurate on people with darker skin.”

Oximeters typically monitor patients’ oxygen levels by shining a light into the skin and measuring how it’s absorbed by the blood. More pigmentation in skin has been observed as one of the factors that can bias the result.

While more experienced medical professionals can mentally offset the discrepancies, they can be missed due to more automated systems or lack of awareness among doctors and nurses.

An NHS report (pdf) published in March said while “the picture on racial bias in pulse oximetry is still mixed, as a worst-case scenario, the application of this intervention can potentially have negative outcomes for patients with more pigmentation in their skin.”

“This is systemic across the world. This is about a racial bias in some medical instruments. It’s unintentional but it exists. And oximeters are a really good example of that,” Javid said in an interview with the BBC.

Asked whether people may have died of COVID-19 as a result of the flaw, Javid said: “I think possibly yes. I don’t have the full facts.”

He said the reason for the discrepancies was that many medical devices, drugs, procedures, and textbooks were put together in white-majority countries.

“I want to make sure that we do something about it but not just in the UK. This is an international issue so I’m going to work with my counterparts across the world to change this,” said Javid.

The UK review is expected to examine all medical devices, and other possible biases such as gender bias.

“For example how we can ensure lifesaving technologies such as MRI scanners can be made accessible to pregnant or breastfeeding women,” the health secretary wrote.