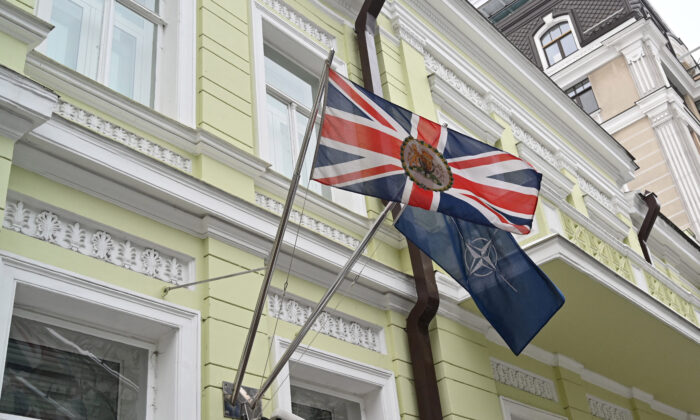 Flags of the United Kingdom and NATO on the building of the UK Embassy in Kyiv on Jan. 24, 2022. (Sergei Supinsky/AFP via Getty Images)
Europe

The UK and Australia said they have begun withdrawing some embassy personnel from Ukraine, while Germany offered assistance to staff members’ families and some civilians who want to leave.

The U.S. State Department has also ordered family members of U.S. government employees at its embassy in Kyiv to leave the Ukrainian capital and authorized the voluntary departure of nonessential civil servants on the evening of Jan. 23.

The UK’s Foreign, Commonwealth, and Development Office (FCDO) said on Jan. 24 that it had started pulling out some embassy staff and family members in response to the “growing threat from Russia.”

It also advised against all travel to three contested border regions and all but essential travel to the rest of Ukraine.

“The British Embassy remains open and will continue to carry out essential work,” its latest travel advice update said.

Russia has amassed tens of thousands of troops on its border with Ukraine. The FCDO said the “pattern of Russian military build-ups near Ukraine’s eastern border and in illegally annexed Crimea” started in late March 2021, and there is “continuing uncertainty about Russian intentions.”

The FCDO advised against all travel to Donetsk Oblast and Luhansk Oblast on Ukraine’s eastern border and Russian-annexed-Crimea. It also advised against nonessential travel to the rest of Ukraine, where the situation is now “generally calm,” in case of a fast-moving escalation of events.

Those who need to travel are told to keep their departure plans “under close review” and monitor the situation regularly.

The Australian government has also begun withdrawing dependents of Australian Embassy staff from Kyiv, it said on Jan. 24 in a travel advice update.

The Department of Foreign Affairs and Trade (DFAT) told Australian citizens in Ukraine to “leave now” by commercial means if it’s safe to do so, and told others “do not travel” to the country “due to the risk of armed conflict.”

DFAT warned that flight availability could change or be suspended at short notice, and urged Australian citizens in Ukraine to register their whereabouts through a newly opened portal.

German officials on Jan. 24 offered help to assist family members of embassy staff and employees of German organizations who wish to leave Ukraine.

“This is a measure we are taking to ensure the safety of the people we are responsible for there,” DW quoted Foreign Ministry spokesman Christopher Burger as saying.

The EU’s High Representative Josep Borrell said on Jan. 24 that it doesn’t plan to “do the same thing because we don’t know any specific reasons.”

Following the U.S. announcement on Jan. 23 that it was withdrawing embassy staff’s family members, Ukrainian Foreign Ministry spokesperson Oleg Nikolenko said the move was “premature and a display of excessive caution.”

The Russian Parliament is due to vote on a proposal by members of Russia’s communist party asking the Kremlin to recognize the independence of the contested Donetsk and Luhansk regions.

If backed by the Kremlin, which has been cautious about the proposal, the move could see an escalation in regional tensions, but Russia would meet with punitive economic sanctions.

United Russia lawmaker Alexander Borodai, former self-proclaimed “prime minister” of Donetsk during the height of the conflict in 2014, voiced support for the proposal. He told Reuters that “a war will become a direct necessity” if the proposal passes.

According to The Sydney Morning Herald, officials from DFAT are in discussion with their Ukrainian counterparts about providing cyber assistance.

NATO is also reinforcing the eastern border region, with Secretary-General Jens Stoltenberg vowing to “take all necessary measures to protect and defend all Allies.”