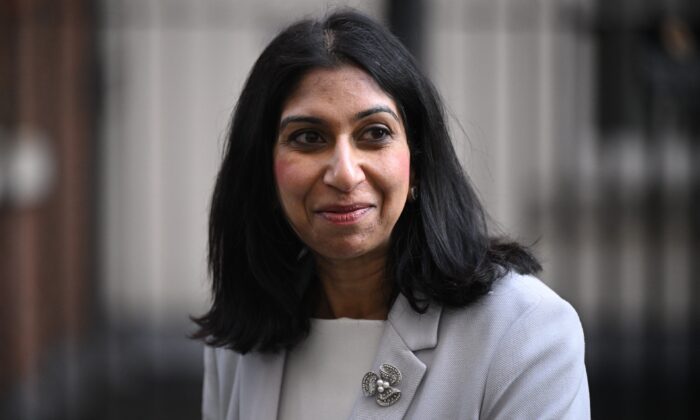 The British attorney general says schools do not have to accommodate students who want to change gender identification, and are under no legal obligation to use certain pronouns or allow children to wear uniform of another sex.

Attorney General Suella Braverman—the top government adviser on law in England and Wales—has become the latest of a number of senior government figures to challenge the ethos of some public institutions which affirm children’s adoption of another gender identity.

Her comments to the Times of London, published on Saturday, come as the government draws up formal guidance for schools on transgenderism.

“Under-18s cannot get a gender recognition certificate, under-18s cannot legally change sex,” she told the newspaper on May 28. “So again in the context of schools I think it’s even clearer actually. A male child who says in a school that they are a trans girl, that they want to be female, is legally still a boy or a male.”

Braverman said that schools have a right to treat them as such under the law.

“They don’t have to say ‘OK, we’re going to let you change your pronoun or let you wear a skirt or call yourself a girl’s name,'” she said.

Last month, Education Secretary Nadhim Zahawi criticised a school after reports that a pupil had been hounded out for asserting that sex was biologically determined.

He also, however, suggested that schools should “accommodate” pupils with gender dysphoria, for example allowing them to use the lavatories with a gender of their preference.

She said young people’s wish to change gender appears to be influenced by their peers.

“Medical professionals, teachers should be taking a much firmer line. They shouldn’t take an unquestioning approach, they shouldn’t just take what the child says.”

Responding to a question, Javid told MPs that he shared concerns about the NHS insisting on children’s perception of their own gender as a starting point for treatment, describing the approach as “overly affirmative.”

Javid highlighted that the NHS had already commissioned a review into its own gender identity services, the Cass Review, with an interim report published in March.

“It is already clear to me from her interim findings and the other evidence I have seen that NHS services in this area are too narrow; they are overly affirmative and in fact are bordering on ideological.”

Javid has also condemned the treatment of the teenage girl who was allegedly hounded out of her private school for insisting biological sex was real, saying that a “growing culture of shutting people down is deeply disturbing.”

“Biological sex matters—ask any doctor or nurse. Facts matter. Respectful debate matters. This growing culture of shutting people down is deeply disturbing and must be challenged,” he added.