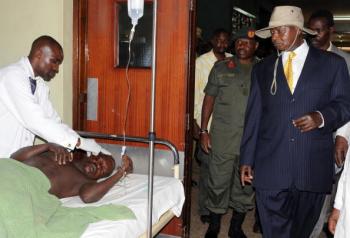 Uganda To Go On Offensive Against Somali Militants

By Marco t'Hoen
Print
Ugandan President Yoweri Museveni, said Uganda will continue to send aid troops to Somalia and crackdown on Somali militants in the wake of the deadly June 11 bomb attacks on World Cup fans in Kampala.

The Somali Islamic militant group, Al-shabaab, claimed responsibility for the bombings that killed 74 people. The group is fighting Somalia’s transitional government, which Uganda has supported since 2007. Uganda has sent 2,700 troops to Somalia as part of the peace and support operation African Union Mission in Somalia (AMISOM). The president said AMISOM will expand their forces to 20,000 to support the Somali government and “eliminate these terrorists.”

The president also said the Ugandan government would adopt a stronger offensive against Somali infiltrators within Uganda, something it was previously reluctant to do because of the disturbance to private citizens and businesses.

“The main problem within Uganda was our laxity and liberal atmosphere not to interfere with functions of private people,” Museveni said Wednesday at a press conference at his country home. “We never monitor very closely, foreigners who come here. We have been having a bit of free atmosphere and this is what they used.”

Museveni said the bombings woke Uganda up and made it clear that a proactive approach was needed to “weed out” Somali militants. He spoke optimistically about the ability of security forces to suppress the militants. “Within Uganda, this is not going to be a long term problem. It will and can be stopped.”

He called upon the Uganda populace to have peaceful relations with the Somali community in Uganda. “I appeal to Ugandans not to be hostile to our African brothers from Somalia especially those who are living here.” Most Somalis are not terrorists, he said. “Don’t look at every Somali living here as if they are connected with this,” he said.

During a visit to the Rugby Grounds the president called the bombings "cowardly.”

“If you want to fight, why don't you look for soldiers and fight them,” he said.

The African Union summit to be held in Kampala from July 19-27 will proceed as scheduled. The event venues will be very well guarded as opposed to the places of the bombings.