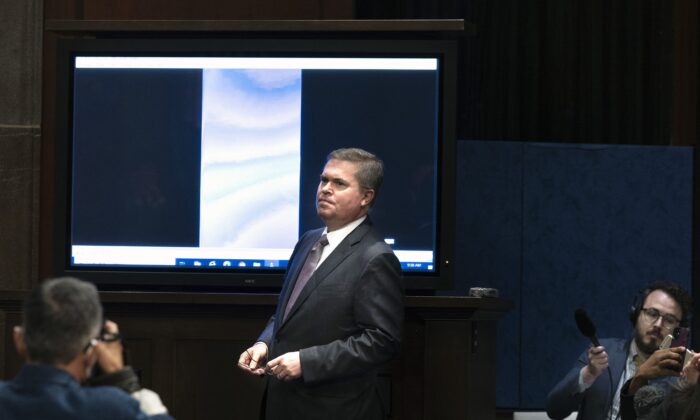 Deputy Director of Naval Intelligence Scott Bray explains a video of an Unidentified Aerial Phenomena, as he testifies before a House Intelligence Committee subcommittee hearing at the U.S. Capitol in Washington on May 17, 2022. (Kevin Dietsch/Getty Images)
US News

In one of the two videos shown, the Pentagon officials said they 'do not have an explanation' for what the spherical flying object is
By Gary Bai

Pentagon officials on May 17 showed lawmakers two videos of unidentified aerial phenomena (UAP), more colloquially known as UFOs, in the first open congressional hearing on the subject since 1966.

The first video, shot in 2021 by military personnel through the window of a U.S. Navy aircraft, showed a white-ish reflective spherical object flying past the aircraft.

“I do not have explanations for what this specific object is,” said Scott W. Bray, deputy director of naval intelligence involved in the UAP Task Force (UAPTF), the Pentagon body responsible for UAP investigations, at the hearing.

The second video, shot by an SLR camera via a night vision goggle, showed a triangular-shaped object moving in the sky while emitting light. Bray said he was “reasonably confident” that these triangles were drones flying in the area.

“The triangular appearance is a result of light passing through the night vision goggles and then being recorded by an SLR camera,” Bray said.

From stories of nuclear ICBMs rendered inoperable during a UFO sighting to footage of flying objects violating the laws of physics, Pentagon officials told lawmakers that sighting incidents are “frequent” and “increasing,” yet they cannot offer “firm conclusions” on their nature or intent.

The hearing came less than a year after the Office of the Director of National Intelligence (ODNI) released a report on the subject—commonly known as the Pentagon UAP report—in which the Pentagon identified 144 UAP sightings from 2004 to 2021, but was only able to explain one.

Bray said the “UAP Task Force database has now grown to contain approximately 400 reports” since the release of the preliminary assessment in June 2021.

Bray noted that some of the reports involved incidents where U.S. military aircraft picked up radio frequency (RF) energy from the UAPs, but none of these detections suggested that they were “non-terrestrial in origin.” The June 2021 report said that these detections of RF energy occurred in a “small number of cases.”

The official did not comment in the hearing about whether any of the remaining reports suggested evidence of extraterrestrial life.

The hearing consisted of a segment open to the public in the morning and a closed-door session starting at noon.

The officials attending the hearing said the UAPTF is starting to seriously examine UAP’s potential threat to U.S. national security and assessing the nature and intent of these phenomena—most of which are inexplicable to current U.S. intelligence—and investigating whether they belong to an adversarial power.

“Unidentified aerial phenomena are a potential national security threat, and they need to be treated that way,” said Rep. André Carson (D-Ind.), chair of the subcommittee. “When we spot something we don’t understand or can’t identify in our air space, it’s the job of those we entrust with our national security to investigate. And report back.”

Rep. Mike Gallagher (R-Wis.) asked about an incident report at Malmstrom Air Force Base in Montana, in which he described, “10 of our nuclear ICBMs were rendered inoperable” while “a glowing red orb was observed overhead.”

“That data is not within the holdings of the UAP Task Force,” Bray answered, adding that he has heard “stories” but has not seen the official data.

The sighting incidents that interest the Pentagon the most are those that exhibit “flight characteristics or signature management that we can’t explain with the data we have available,” Bray said when asked about his knowledge of flying objects that seem to move without visible means of propulsion and violate existing principles of physics.

“I would say that we’re not aware of any adversary that can move an object without discernible means of propulsion.”

When the Pentagon officials disclosed that China has a separate agency investigating UAPs and “some” intelligence-sharing occurs between the United States and external agencies, Rep. Brad Wenstrup (R-Ohio) struck a cautionary tone.

“If [these technologies] are developed by an adversary through some breakthrough technology, they can be very disruptive to our military actions, or, at least, serve as a disruption,” Wenstrup said. “Be careful who we share our data with, and don’t necessarily trust some of the data we may get from someone else.”

Additionally, Carson asked the officials whether they have processes to check whether incidents investigated by the UAP Task Force were classified projects developed by the U.S. military.

“As the ODNI report makes clear, one possible explanation for UAPs is that we are detecting U.S. aircraft, either secret air programs or even test prototypes,” Carson said. “I do want to make sure the U.S. government isn’t chasing its own tails.”

Ronald S. Moultrie, undersecretary of defense for intelligence and security, answered that the UAPTF has a process for working with the Pentagon and other U.S. government agencies to “deconflict” its investigations with potential testing of new technologies.

Bray emphasized that not all information collected by the task force can be released to the public, as the methods and technologies that the U.S. military use to discover and collect UAP data could be security-sensitive information.

“We do not want potential adversaries to know exactly what we are able to see or understand or how we come to a conclusion,” Bray said. “Therefore, disclosures must be carefully considered on a case-by-case basis.

“Our goal is to strike that delicate balance, one that enables us to maintain the public’s trust while preserving those capabilities that are vital to the support of our service personnel.”

In 2017, The New York Times reported about the existence of a Pentagon program to collect data on space phenomena, which was effectively a part of the remnants of the $22 million Advanced Aerospace Threat Identification Program that began in 2007.

While the Pentagon ended funding for the program in 2012, the Times reported, some of its functions, such as collecting and investigating military UAP sighting incidents, remained.

In June 2020, the Senate Intelligence Community voted to direct the Director of National Intelligence, in consultation with the Pentagon and other relevant agencies, to submit a report with details on UAP investigations.

The nine-page report released in June last year (pdf), titled “Preliminary Assessment: Unidentified Aerial Phenomena,” included authentication of widely circulated videos and sparse details on the UAPs. Notably, the report said there were “no clear indications that there is any nonterrestrial explanation” associated with the UAPs.

The UAPTF is currently transitioning to the Airborne Object Identification and Management Synchronization Group, which was established on Nov. 23, 2021, and run under the office of the undersecretary of defense for intelligence and security.

“The team has made a lot of progress, but we really are just establishing the foundation for the more detailed analysis that’s yet to be done,” Bray said at the Tuesday hearing.