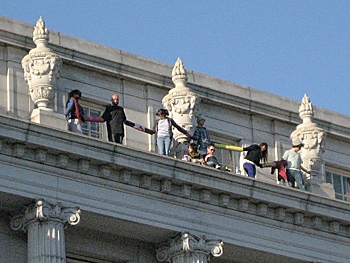 Several University of California, Berkeley students stand on the ledge of a four-story campus building to protest education cuts on Thursday, March 3 in Berkeley, Calif. (Vicky Jiang/The Epoch Times)
US

Vicky Jiang
View profile
Follow
biggersmaller
Print
BERKELEY, Calif.—Several University of California, Berkeley students stood on the fourth-story ledge of the school's Wheeler Hall in protest of budget cuts to public education on Thursday afternoon, standing in a row, hands tied to one another, as rally leaders shouted through loud speakers below.

Red and white banners hanging from the main entrance to Wheeler Hall read "Stop the Cuts" and "The Regents! Democratize."

Berkeley Chancellor Robert Birgeneau has sent out an email to student and faculty closing Wheeler Hall to deal with "a health and safety issue." All classes and events scheduled in Wheeler Hall for the afternoon and evening of March 3 were cancelled.

Rather than an occupation of Wheeler as before, leaders shouted that having students risk their lives standing on a fourth-story ledge would give UC police no room to brutally break up their demonstration.

Meanwhile, a crowd of 50 or so students gathered around Wheeler Hall, some sitting on the steps to the building, and others looking up to see the students in protest.