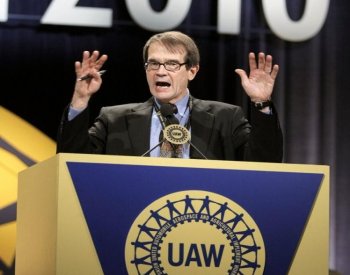 REACHING OUT: Then newly-elected United Auto Workers president, Bob King, delivers his first speech as president at the closing of the the 2010 UAW Constitutional Convention June 17, 2010 in Detroit, Mich. King is reaching out to non-union auto companies (Bill Pugliano/Getty Images)
Business

By Antonio Perez
Print
NEW YORK—Pitching itself as a partner to automakers, the United Auto Workers (UAW) union has had some preliminary discussions with non-U.S. automakers with assembly plants in the United States, the UAW said on Wednesday.

The UAW has hailed itself as a partner to U.S. automakers—by offering benefit concessions during the recent financial crisis and emerging to become minority shareholders of General Motors and Chrysler.

“With our unionized employers, we have created a culture of trust, teamwork, and openness,” King said in a speech at the Automotive News World Congress in Detroit on Tuesday. “We have completely discarded the outdated remnants of the ‘us versus them’ mentality that resulted in rigid work rules and narrow job classifications.”

In the past decade, the UAW and Detroit automakers have improved their relationship in an effort to make U.S. automakers more competitive against foreign competition.

The union indicated that it has held discussions with non-U.S. automotive companies, which currently do not allow organized unions in their plants, King said.

“We take note of the fact that all of the German, Japanese, and Korean automakers have a long history of recognizing and working with unions in their home countries,” said King.

Firms such as Toyota Motor Corp., Honda, and Nissan have operated plants in the United States, mostly in the Southern states, for more than two decades.

“We want to restart our relationship with these companies by presenting them with an ethical framework that states that American workers have the same right to form unions as the workers in their home countries,” said King.

“We have reached out to the nonunion auto companies in a spirit of respect to ask that they agree to these principles.” King declined to name any specific names.

In recent years, more foreign automakers have opened plants in the United States, notably Hyundai of South Korea, BMW and Mercedes-Benz of Germany, and Volkswagen of Germany.