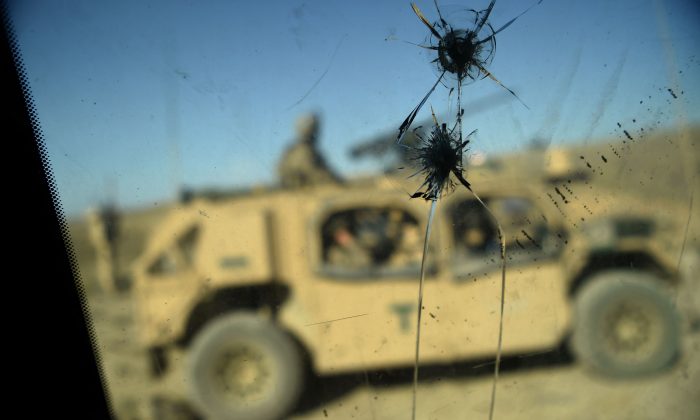 In this photo taken on July 7, 2018, US Army soldiers from NATO are seen through a cracked window of an armed vehicle in a checkpoint during a patrol against Islamic State militants at the Deh Bala district in the eastern province of Nangarhar Province. (Wakil Kohsar/AFP/Getty Images)
US News

US Military Identifies Soldier Killed in ‘Insider Attack’ in Afghanistan

A U.S. soldier killed in Afghanistan was identified late on Sunday as Cpl. Joseph Maciel of South Gate, California, the Department of Defense said in a release.

Maciel, 20, was killed, and two others wounded, during an apparent “insider attack” in southern Afghanistan, the NATO Resolute Support mission said in a statement.

The two wounded U.S. service members were not identified but were in “stable” condition on Saturday and are being treated, it added.

Maciel was deployed from Fort Benning, Georgia, which straddles the Alabama and Georgia border, near Columbus, Ga., and he was assigned to the 1st Battallion, 28th Infantry Regiment, 3rd Infantry Division.

Media in his hometown said he was deployed in February to help provide security for the brigade’s military advisers. No other details of the attack were available.

“Cpl. Maciel was an excellent soldier beloved by his teammates and dedicated to our mission,” Lt. Col. David Conner, Maciel’s battalion commander, said in a statement to the military news website.

He was deployed in support of the 1st Security Force Assistance Brigade. He died in the district of Tarin Kowt in the Afghan province of Uruzgan, the DOD said.

The incident is being investigated, the DOD said.

No other information was available early on Monday, and a military spokesman did not immediately return telephone calls or emails from Reuters.